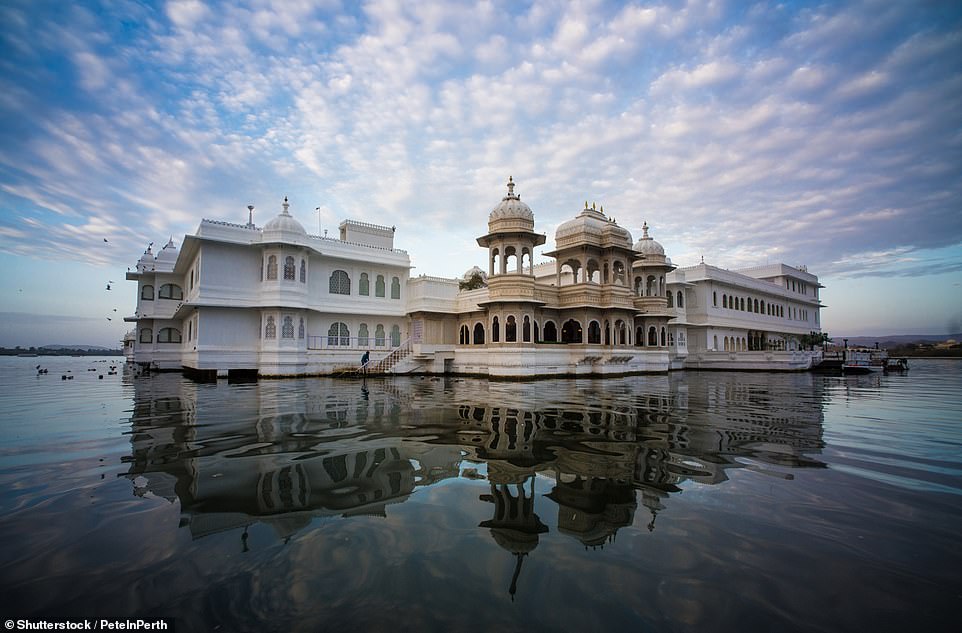 We’ve scoured the world to bring you the world’s most edifying royal edifices – palaces that are big on beauty and plain big in scale.

Behold the Palace of Parliament in Bucharest, which holds the Guinness World Record for being the heaviest building on the planet with its 700,000 tonnes of steel and bronze.

Marvel at Hampton Court Palace with its vast kitchens, where 200 cooks would rustle up feeds for Henry VIII and his entourage.

Then there’s the palatial Potala Palace in Tibet, which is the world’s highest palace at 12,139ft (3,699m) above sea level. Scroll down to feast your eyes on these vast premises and more, which take the art of housebuilding to a whole new level…

LAKE PALACE, UDAIPUR, INDIA: This seemingly floating palace was built between 1743 and 1746 as a summer residence for Maharana Jai Singh II of Udaipur, Rajasthan. Udaipur.org.uk says the ‘wonderful architecture of the Lake Palace will send shivers down your spine’. Other highlights include a series of courtyards and opulent rooms decked out with intricate crystal work, stained glass windows and mosaics. The palace now serves as a luxury hotel operated by Taj Hotels 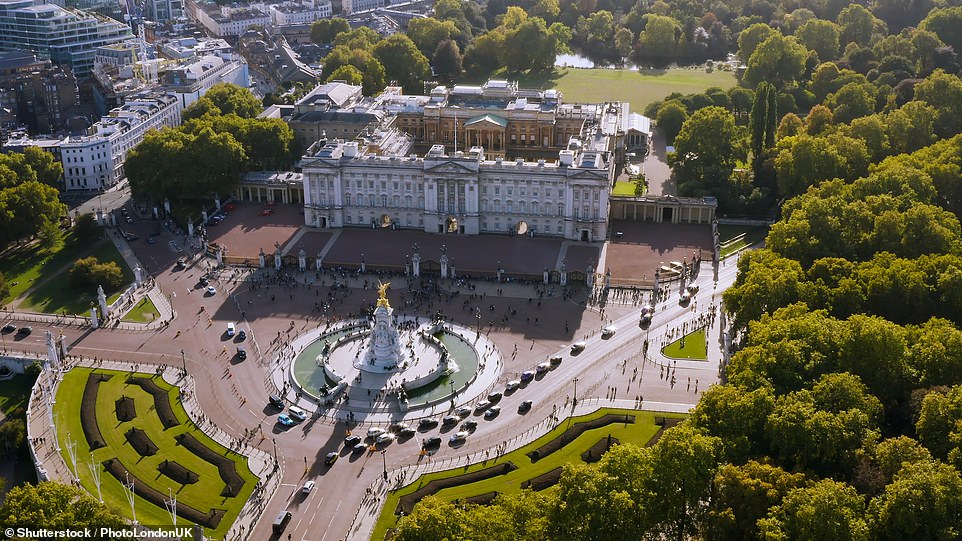 BUCKINGHAM PALACE, LONDON, UK: Since 1837, this magnificent edifice has been the official London residence of the UK’s sovereigns, though it was originally built at the beginning of the 18th century as a home for the 3rd Earl of Mulgrave, John Sheffield. George III bought it in 1761 for his wife, Queen Charlotte, and it became known as The Queen’s House. Over the years it was vastly expanded. Today, according to www.royal.uk, it has ‘775 rooms… 19 State rooms, 52 Royal and guest bedrooms, 188 staff bedrooms, 92 offices and 78 bathrooms’ 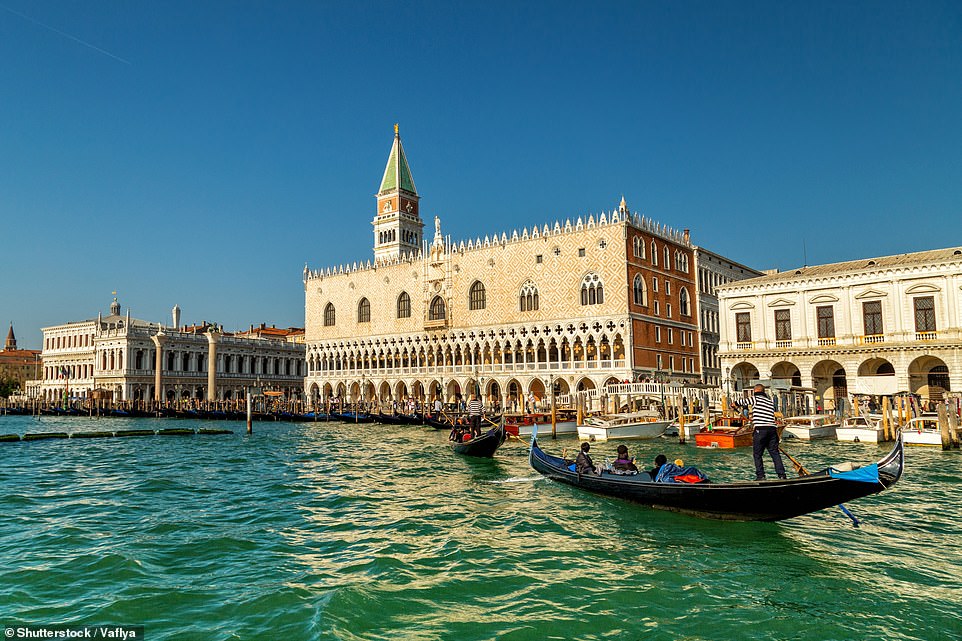 DOGE’S PALACE, VENICE, ITALY: Dating to the early half of the 14th century, the Doge’s Palace served as Doge’s residence and the seat of the Venetian government for several centuries until the fall of the Venetian Republic in 1797. The Gothic masterpiece was opened as a public museum in 1923. One of the many highlights is the Chamber of the Great Council, which is one of the largest rooms in Europe, measuring 173ft (53m) in length and 82ft (25m) width-wise 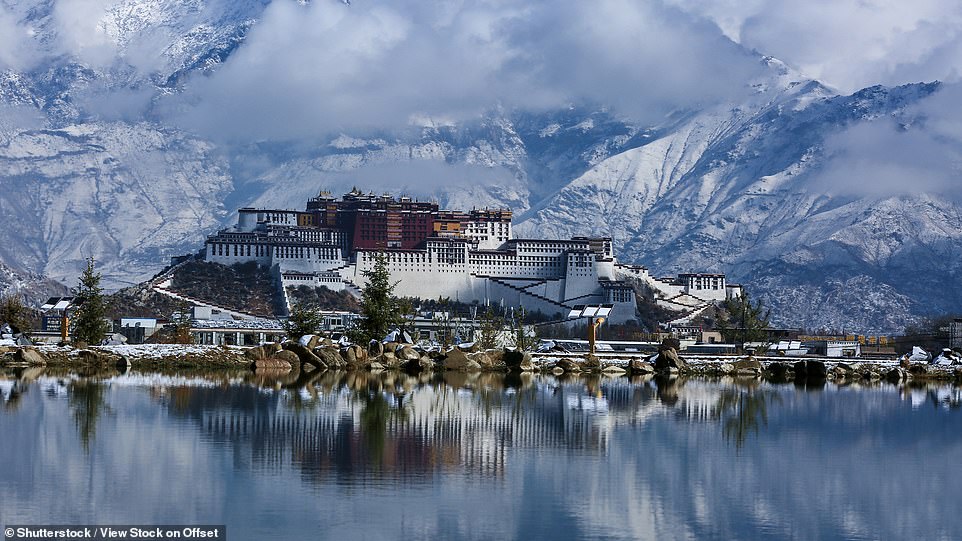 POTALA PALACE, LHASA, TIBET: Located at 12,139ft (3,699m) above sea level, Potala Palace in Tibet’s capital, Lhasa, is the world’s highest palace. Built in 1649, it served as the winter palace for Dalai Lamas until 1959. It was then opened as a museum, although practising monks still live there. One of the most impressive features is a stupa of the fifth Dalai Lama, which is 48.7ft (14.85m) high and overlaid with 4.1 tons of gold, according to www.chinahighlights.com 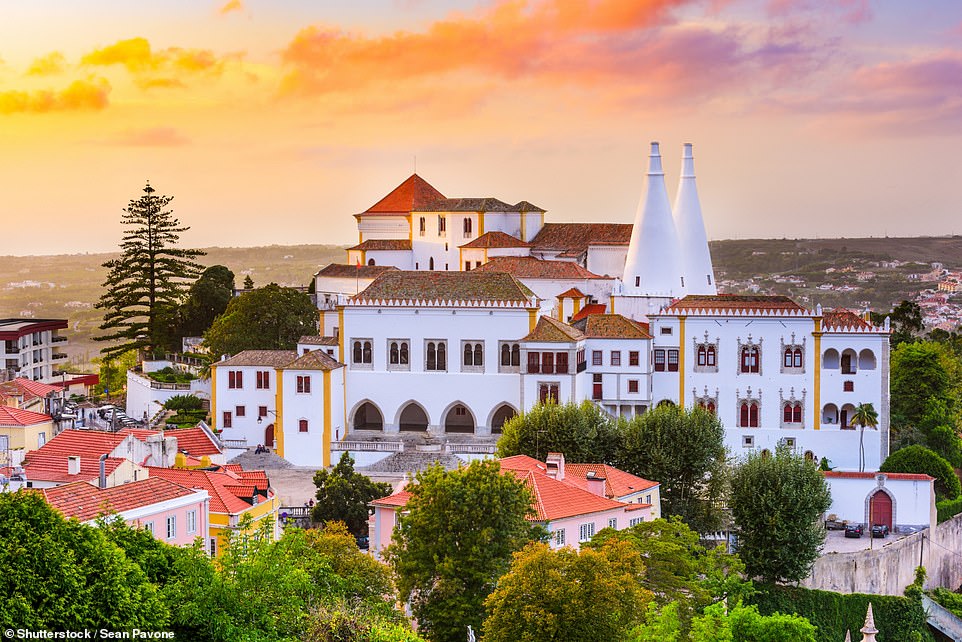 NATIONAL PALACE, SINTRA, PORTUGAL: Visible for miles around, the National Palace in the Portuguese resort town of Sintra was completed in 1854 and is considered a prime example of European Romantic architecture. The site www.sintra-portugal.com says that the ‘two massive chimneys which protrude from the kitchens’ have become the icon of Sintra 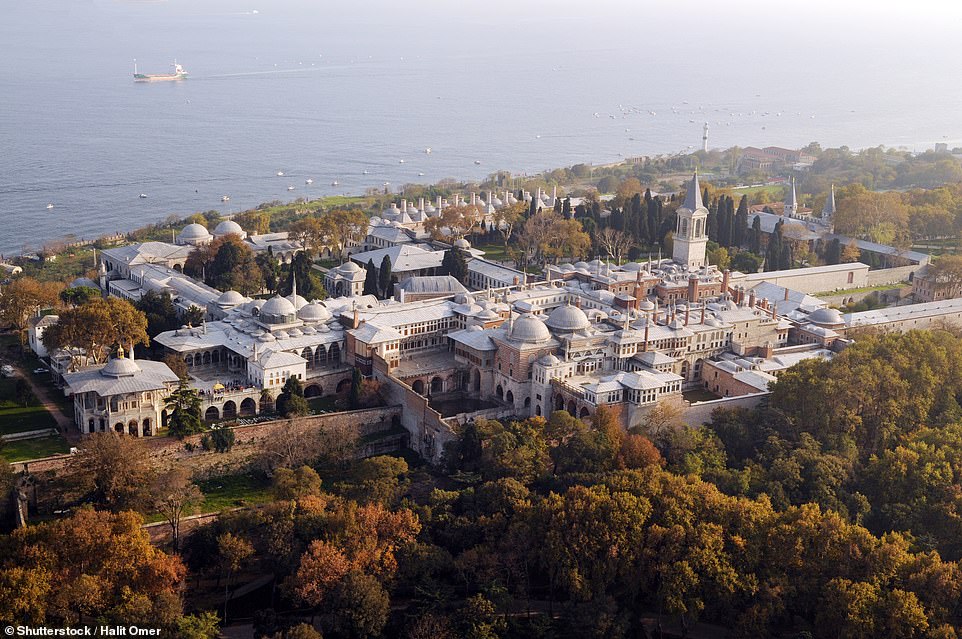 TOPKAPI PALACE, ISTANBUL, TURKEY: This palace, built by Mehmet the Conqueror in the mid-15th century, was the home for Ottoman sultans for almost 400 years. Following the end of the Ottoman Empire in 1923, the government decided to turn it into a museum

PALACE OF VERSAILLES, FRANCE: The Palace of Versailles was originally a hunting lodge designed by Louis XIII, but his son, Louis XIV, extended it to spectacular effect and it became home to the French court and government in 1682. From there, it continued to evolve under the rule of different kings right up to the French Revolution, when affairs then moved to Paris. It was decided to open the palace as a museum ‘dedicated to all the glories of France’ in the early 19th century. The official website states that the palace has 2,300 rooms spread over 63,154 m sq. It has been a Unesco World Heritage site for 30 years 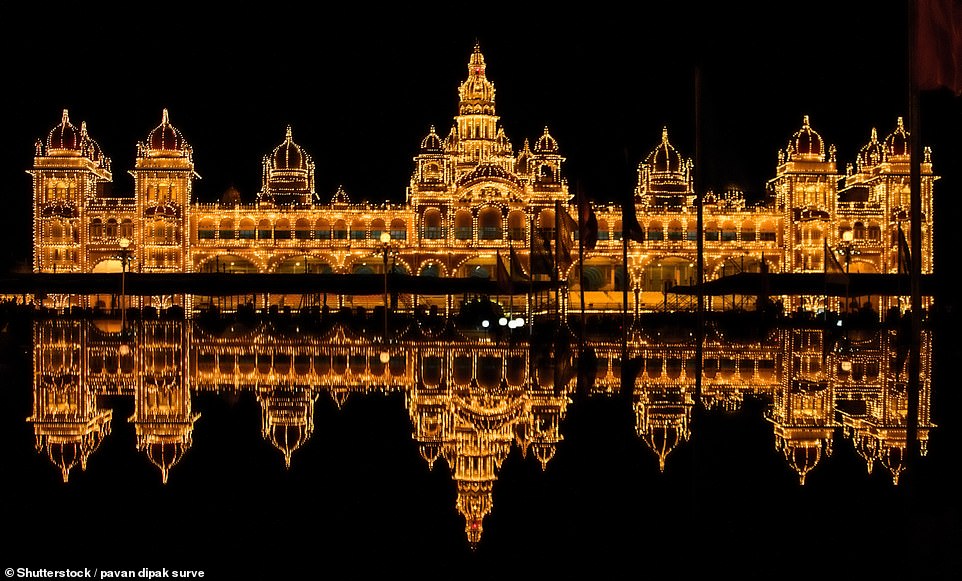 MYSORE PALACE, KARNATAKA, INDIA: This spectacular palace in the south Indian state of Karnataka was built in 1912 for the Wodeyar dynasty, who ruled over the Kingdom of Mysore from 1399 to 1947. The website Know India says of the palace, which is now a visitor attraction: ‘Built in Indo-Saracenic style with domes, turrets, arches and colonnades, the palace is often compared with the Buckingham Palace of Britain because of its grandeur. Henry Irwin, the British consultant architect of Madras state, designed it’ 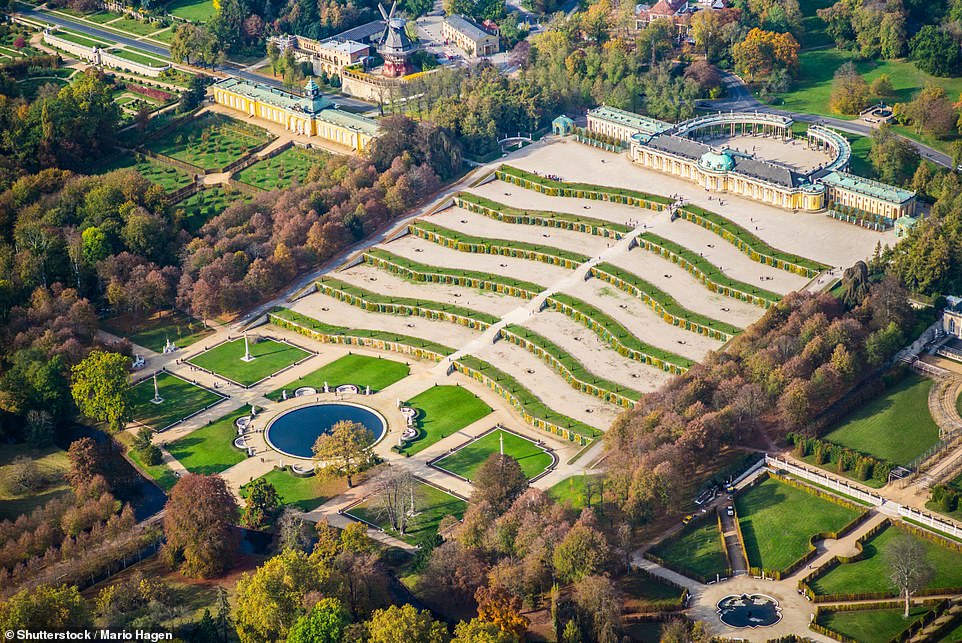 SANSSOUCI PALACE, POTSDAM, GERMANY: Constructed between 1745 and 1747, the Sanssouci Palace was built for Friedrich the Great as his summer retreat. One of the unique features is the terraced vineyard on the southern slope of the Bornstedter ridge (seen above), with its six levels connected by 132 steps 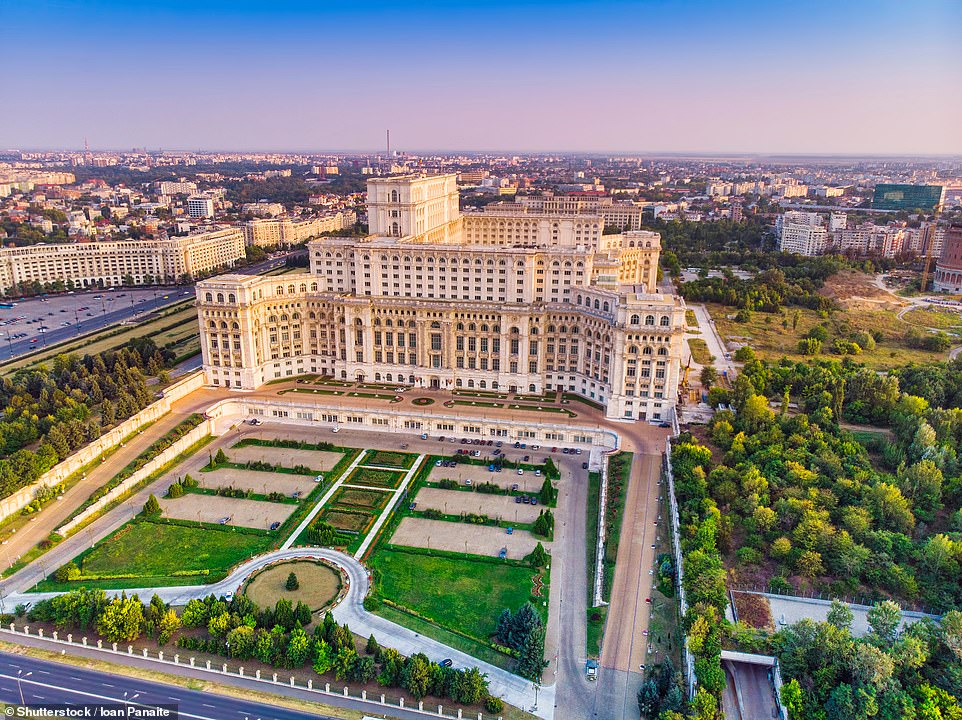 PALACE OF THE PARLIAMENT, BUCHAREST, ROMANIA: This sprawling communist structure, constructed between 1984 and 1997,  is the world’s second-biggest administrative building by surface area after the US Pentagon, thanks to a floor area of 365,000 square metres (3,930,000 sq ft). And it holds the Guinness World Record for being the planet’s heaviest building, thanks to 700,000 tonnes of steel and bronze combined with 35.3million cubic feet (1 million cubic m) of marble, 3,500 tonnes of crystal glass and 31.7million cubic feet (900,000 cubic m) of wood 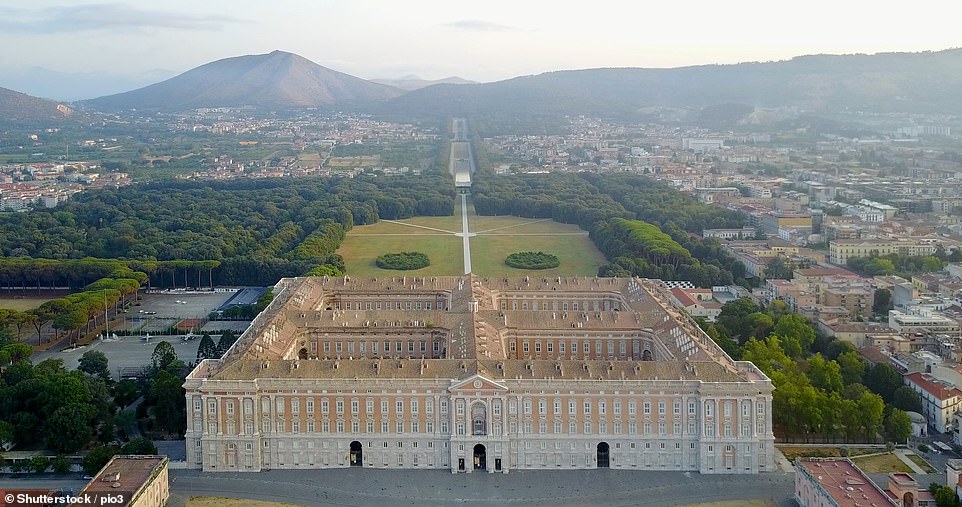 ROYAL PALACE OF CASERTA, ITALY: This expansive Baroque-style palace was commissioned by Charles III, the king of Naples, in the mid-18th century as a royal residence and as a rival to the Palace of Versailles. Musement.com notes that it took several decades to complete the palace and the finished building features more than 1,200 rooms and 1,742 windows. It also highlights that the palace also had ‘an outrageously high cost’. This was 6,000,000 ducats, or around £700million ($950million)

UMAID BHAWAN PALACE, RAJASTHAN, INDIA: Deemed the world’s sixth-largest private residence, the Umaid Bhawan Palace in Rajasthan took 15 years to construct and was completed in 1943. It was built by the Jodhpur royal family and designed by the renowned Edwardian British architect Henry Lanchester. Today, the palace is divided into three parts – a 70-room luxury hotel managed by Taj Hotels, a museum showcasing the royal family’s collections and a residence for the maharaja’s descendants 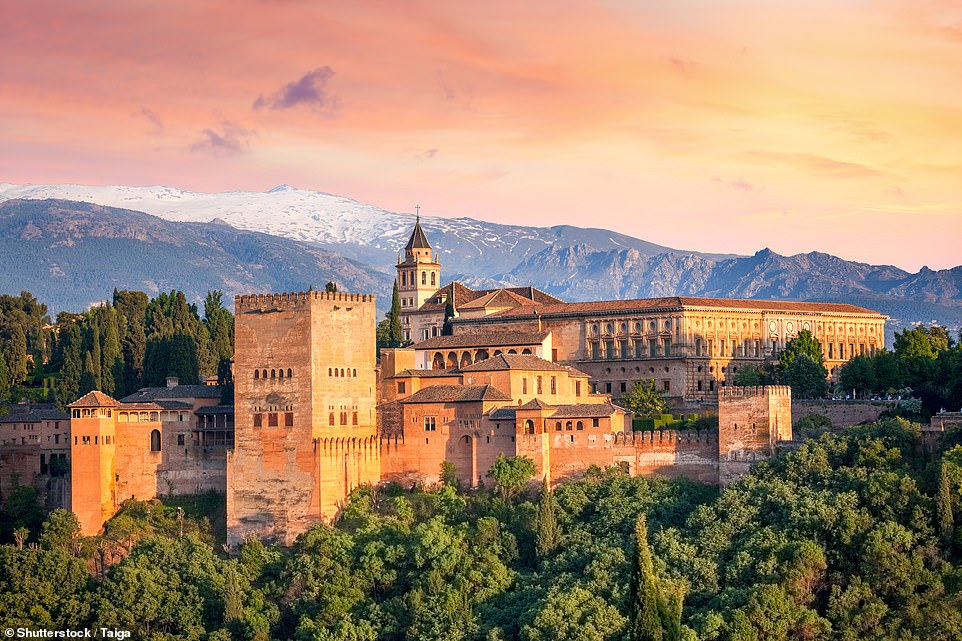 ALHAMBRA, GRANADA, SPAIN: The Alhambra, which is built on a raised plot overlooking Granada, is a splendid example of Moorish architecture. The showpiece palace was constructed between 1238 and 1358 on the site of a previous fortress. Notjustatourist.com says that one of the palace’s standout features is a chamber known as the ‘whispering gallery’. It adds: ‘The curvature of the ceiling makes the sound travel from one corner to the opposite one, so be careful and don’t share any important information while you’re there!’ 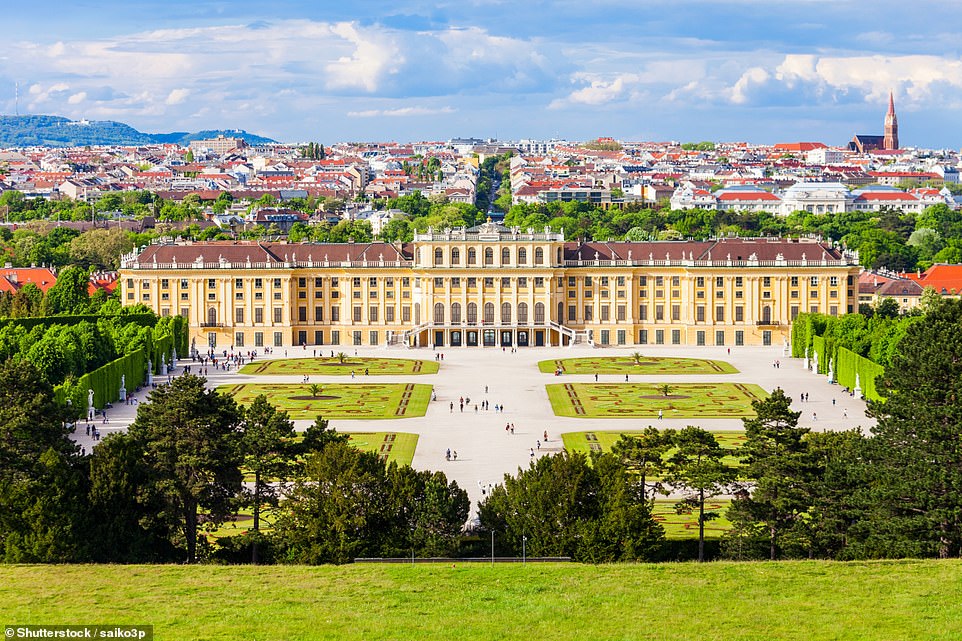 SCHONBRUNN PALACE, VIENNA, AUSTRIA: This sprawling structure started life as a 16th-century mansion, which evolved into a hunting lodge and then into a palace, framed by picturesque formal gardens. One of the palace’s fun facts, as noted by concert-vienna.com, is that Mozart came to Schonbrunn as a six-year-old child to play his first concerts, for the royal family in 1762. It adds: ‘Another classical composer to visit the palace was Joseph Haydn, who came as a choirboy to take part in a musical production’

IOLANI PALACE, HONOLULU, HAWAII: Iolani Palace, which is open to tourists, claims the title of being the only official royal residence in the US. From 1882 to 1893 it served as the official residence of the Hawaiian Kingdom’s last two monarchs: King Kalakaua and his sister and successor, Queen Liliuokalani. The tourism authority’s website says: ‘The palace was a symbol of promise for the Hawaiian Kingdom built by King David Kalakaua, “The Merrie Monarch”. Influenced by European architectural styles, this royal residence included Hawaii’s first electric light system, flush toilets and intra-house telephones’

WINTER PALACE, ST. PETERSBURG, RUSSIA: This ornate Baroque-style palace on the banks of the River Neva served as the official residence for Russian tsars from 1732 to 1917. Tour company RSPB Travel describes the palace, which is now open as a museum, as ‘huge’, with 1,057 rooms, 117 staircases, 1,945 windows and 1,786 doors 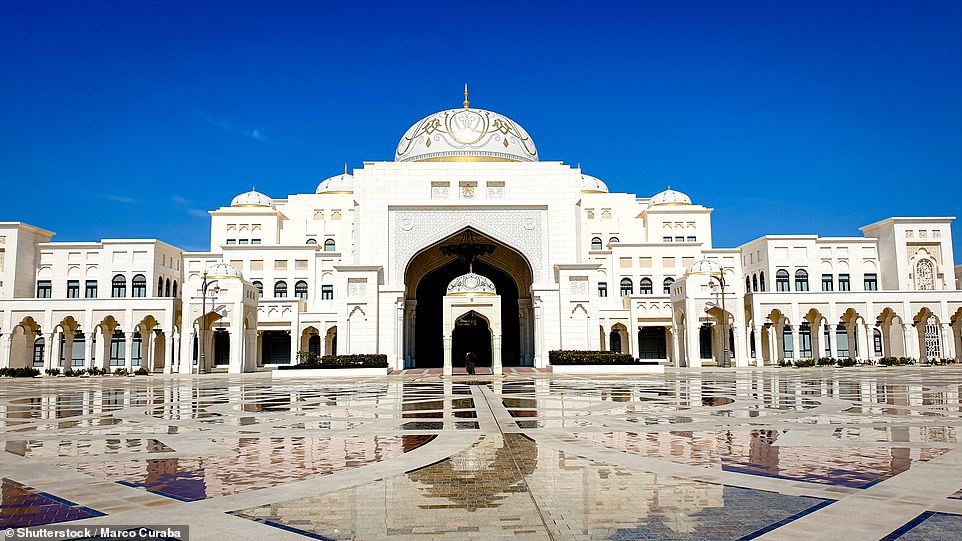 QASR AL WATAN, ABU DHABI, UAE: Qasr Al Watan, which was finished in 2017, is a working presidential palace but it is also open to the public for tours. Emirates247.com reveals some fascinating facts about the building, including the fact that its doors took 700 hours to make, with 23-carat gold inlaid into maple wood. The Great Hall, meanwhile, features one of the largest domes in the world, with a diameter of 121ft (37m) 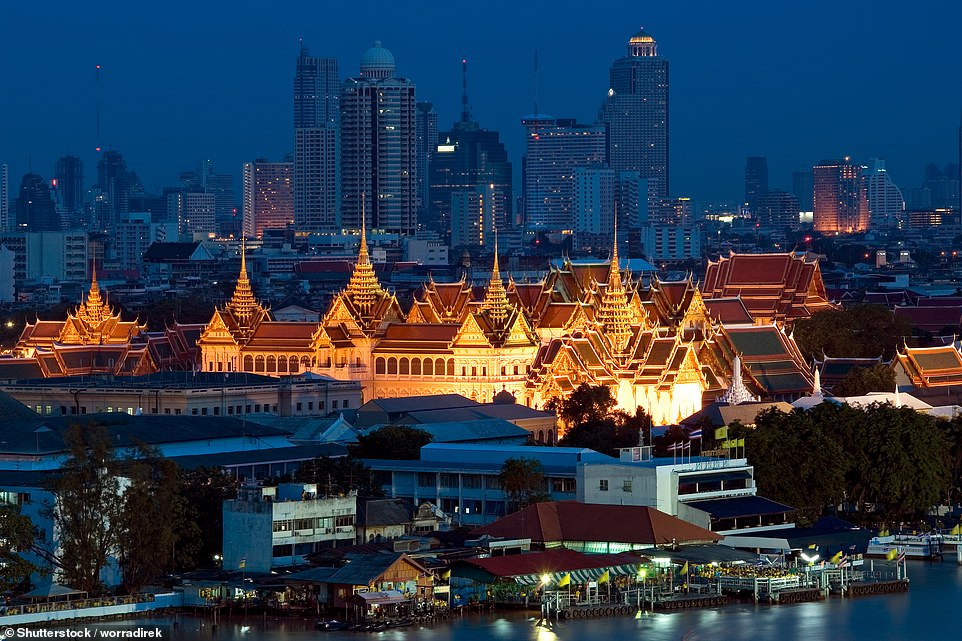 THE GRAND PALACE, BANGKOK, THAILAND: Built in 1782, the gleaming Grand Palace is a vast complex of buildings in the heart of Bangkok consisting of royal residences, throne halls, administrative offices and sacred temples. It can be visited daily from 8:30am to 3:30pm

HAMPTON COURT PALACE, UK: This magnificent palace, built in the early 16th century, was originally commissioned by Cardinal Wolsey as a home, but it went on to attract the King of England, Henry VIII. He used it as a vast leisure complex and he took all six of his wives there. Britain and Britishness notes that the palace is home to the largest surviving 16th-century kitchens in the world. It reveals that ‘200 cooks worked slavishly from sunup to sundown to feed 800 guests when Henry’s entourage was staying’ 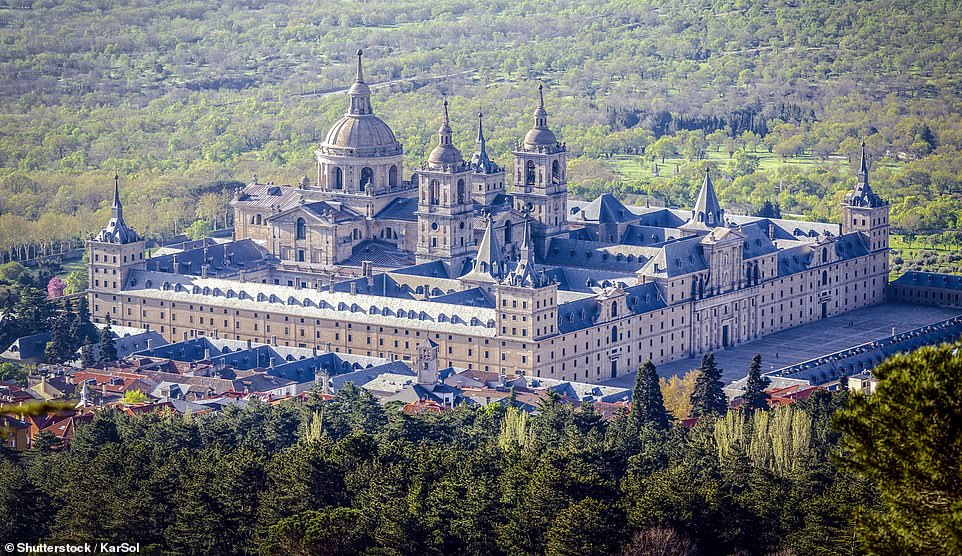 ESCORIAL MONASTERY AND PALACE, SPAIN: Construction of El Escorial took 21 years, with it finally completed in 1584. The vast palace complex was conceived by King Philip II and the buildings include a church, a monastery, a royal palace, a college and a library. The palace’s official website notes that today, the Escorial is a Unesco World Heritage Site and one of Spain’s most visited landmarks 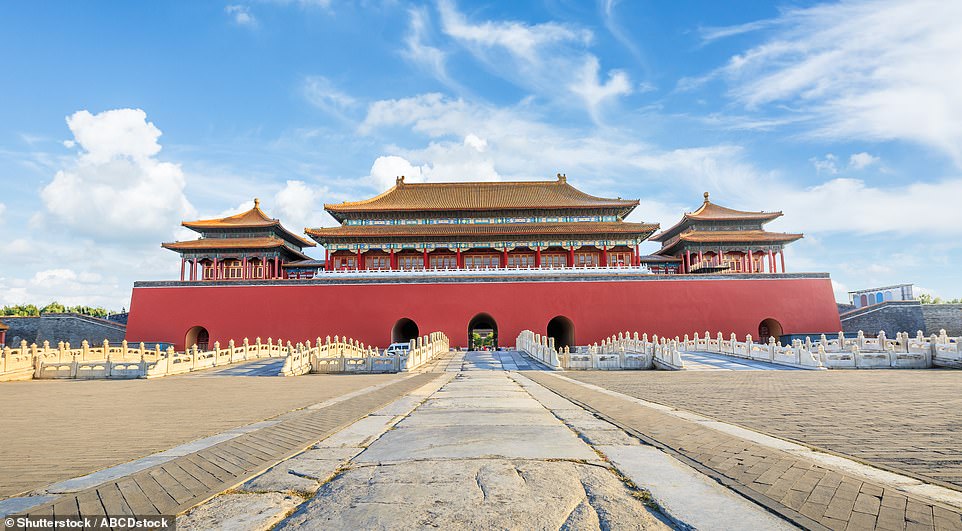 FORBIDDEN CITY, BEIJING, CHINA: The Forbidden City, constructed in 1420, is one of the largest palace complexes in the world. China Highlights notes that it covers an area of about 72 hectares (180 acres) with a total floor space of approximately 1.6million sq ft (150,000 sq m) and that it consists of more than 90 palaces, 980 buildings and over 8,728 rooms 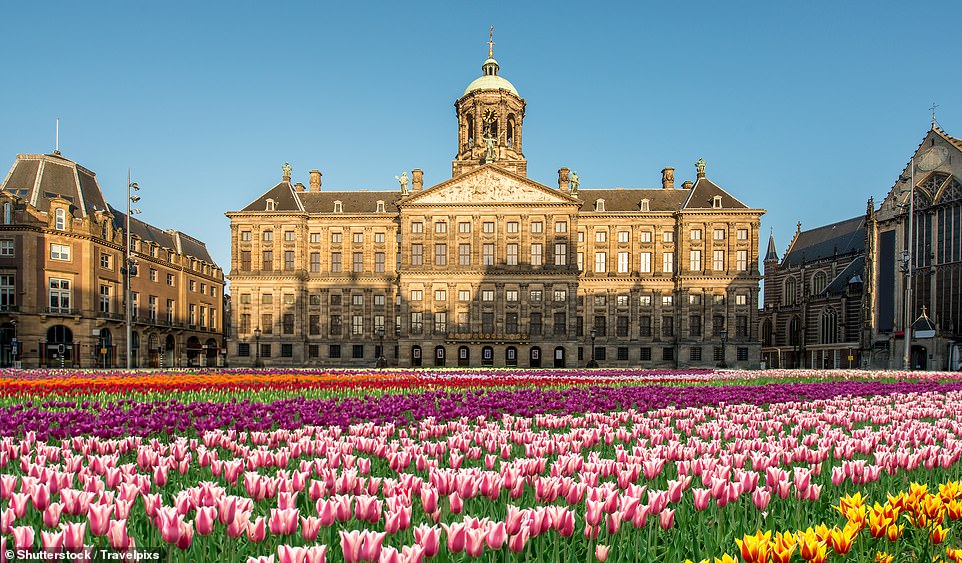 ROYAL PALACE AMSTERDAM, NETHERLANDS: The Royal Palace of Amsterdam is located in the heart of the Dutch capital and it dates to the mid-17th century. It was originally built as a city hall but transformed into a palace in the early 19th century by King Louis Napoleon. Since then, it has been used as an official reception palace by the royal family for almost 200 years, playing host to many events throughout the year 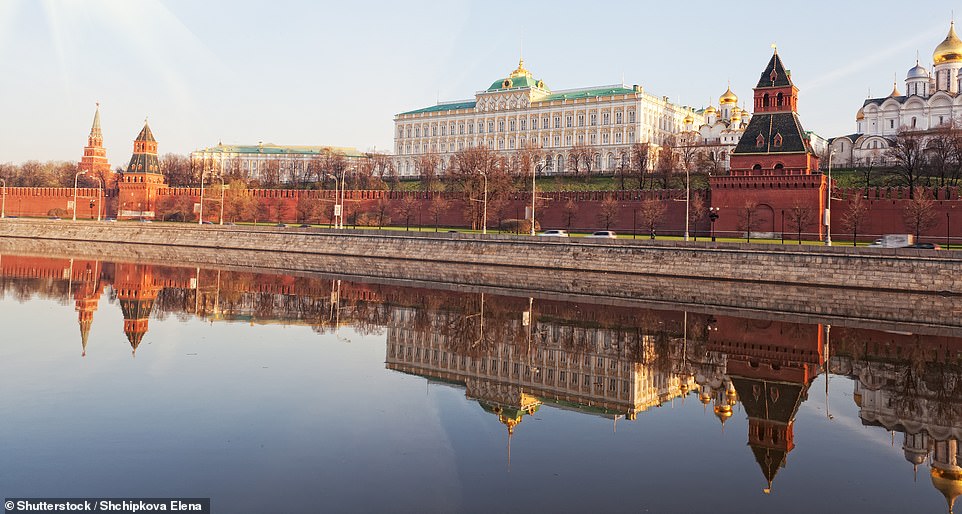 GRAND KREMLIN PALACE, MOSCOW: The Kremlin, seen above from the banks of the Moskva River, makes for an impressive sight. While the mid-19th century building was once home to the tsars of Russia it is now the official residence of the president. In 2013, Vladimir Putin added a helipad to the roof to help prevent traffic jams caused by his commute convoy 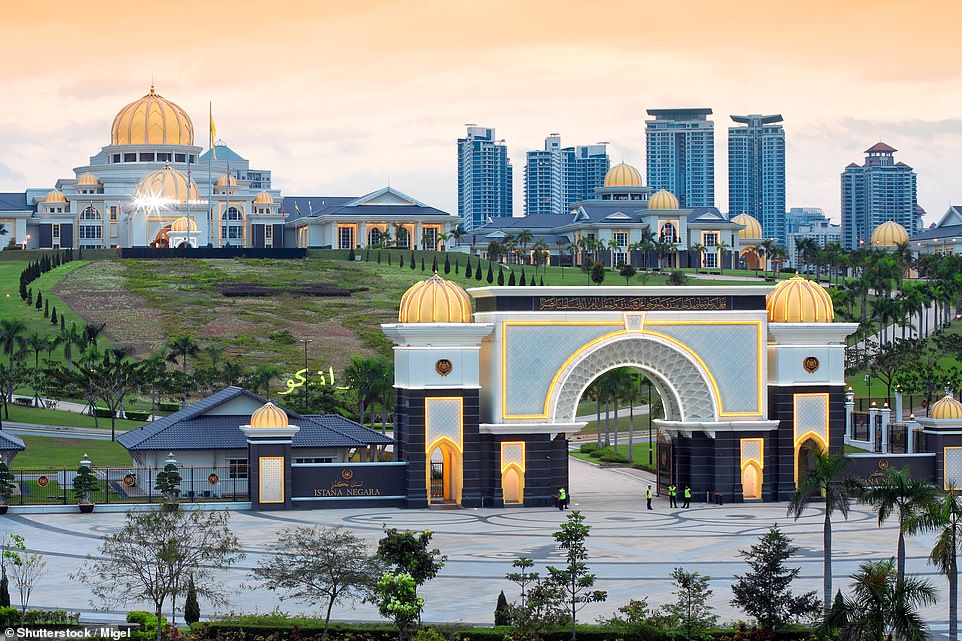 ROYAL PALACE ISTANA NEGARA, KUALA LUMPUR, MALAYSIA: The royal palace of Malaysia opened in 2011 and replaced an older version that is now open as a national museum. The building, which is not open to the public, features 22 golden domes and it cost RM 800m (£1.35m) to build