I’m more of a pedalaholic than a petrolhead, but I’ve always secretly lusted after a certain quintessential English sports car, so when the chance came to spend a week with a Morgan I jumped at the chance.

I drove along the Great North Road, staying at old coaching inns — but there was a gravel stretch of this historic highway, and I needed a bicycle for that. A bicycle that could squeeze into a bootless two-seater.

There’s another quintessentially English brand that fitted the bill: a Brompton folding bike. Wrapped in a protective plastic bag, my Brompton fitted neatly in the Morgan’s passenger seat, pinned by the seatbelt.

Writer Carlton Reid spent a week giving a Morgan a whirl along the Great North Road. Pictured, the Morgan Plus Four in front of the impressive gatehouse of Burghley House, less than a mile from Stamford 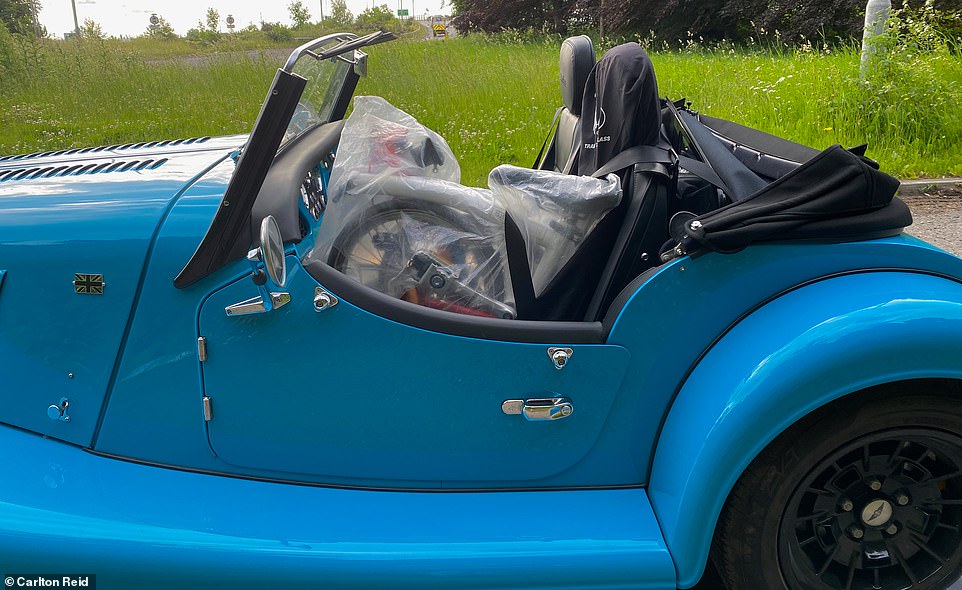 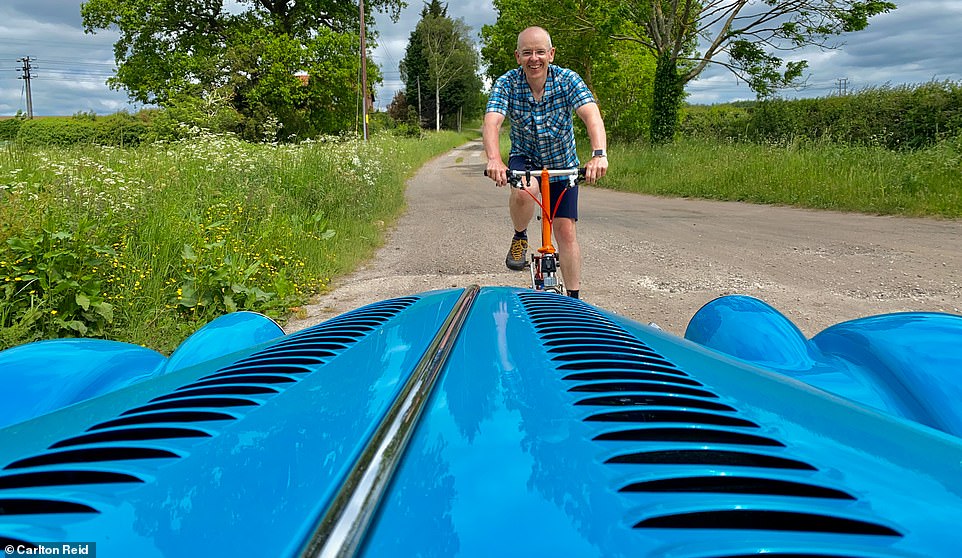 There was just about space behind the driver’s seat to fit two overnight bags, one of them filled with electronic gadgets that I used to film my journey.

Despite being a new build, there’s something undeniably nostalgic about Morgan’s £65,000 Plus Four. Not only does it turn heads as it passes, purring, but it’s also a conversation starter.

At one of my coaching inn stopovers, a fellow hotel guest told me of his joy at owning a Morgan when he was younger. Why did he sell it? ‘I got married and had kids,’ he said with a faint smile. ‘Something had to go.’ His pain was palpable.

And when, at a quiet junction, I asked for directions (there’s a modern 2.0-litre BMW engine in the Plus Four, but no satnav), two women gushed over the beauty of this most curvaceous of cars. 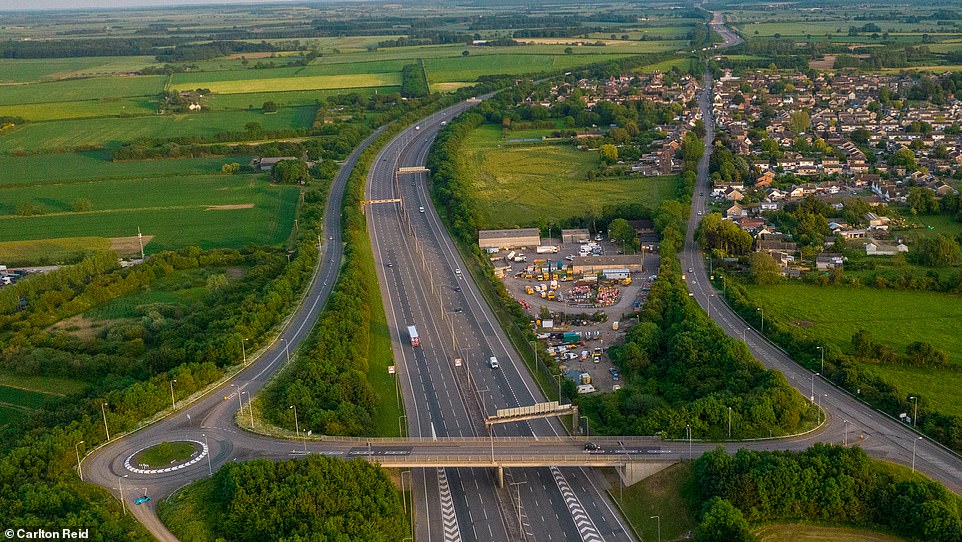 Norman Cross junction, A1M, with Stilton in the background. The Great North Road – which was built atop Roman Ermine Street – can be seen dissecting Stilton 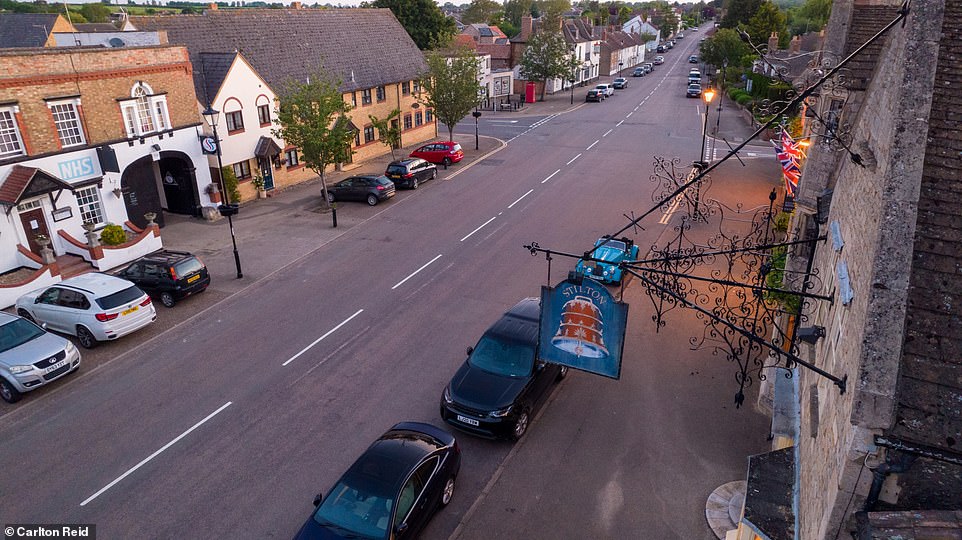 During his road trip, Reid checked into The Bell Inn in Stilton. The inn has a famously oversized sign (pictured) and the town a very wide high street because it used to be the Great North Road 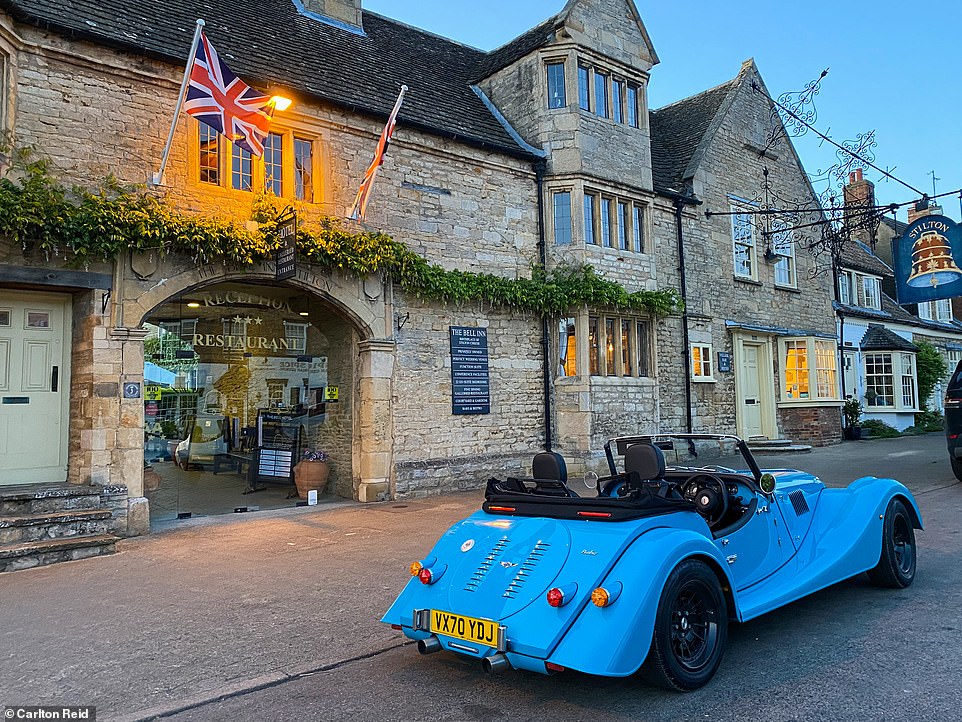 The Morgan parked outside The Bell Inn. Reid said: ‘Arriving in a Morgan at each glorious coaching inn was almost as appropriate as arriving in an 18th-century mail coach and, just like the travellers of the turnpike era, I had to shake road muck from my clothes before I entered’ 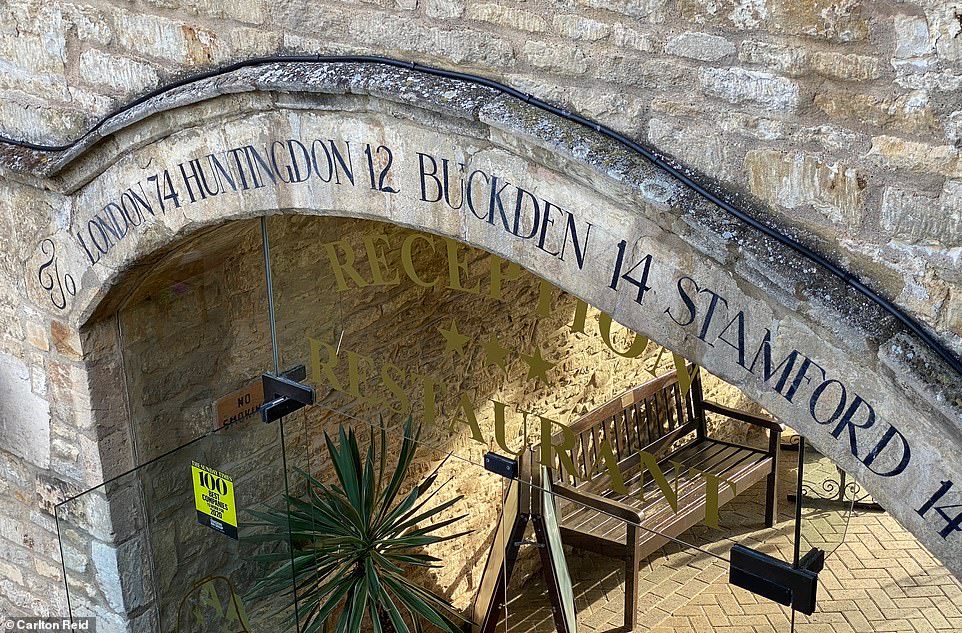 The glassed-over entrance to The Bell at Stilton. The archway was originally the carriage entrance with the distances to different destinations etched on the stones 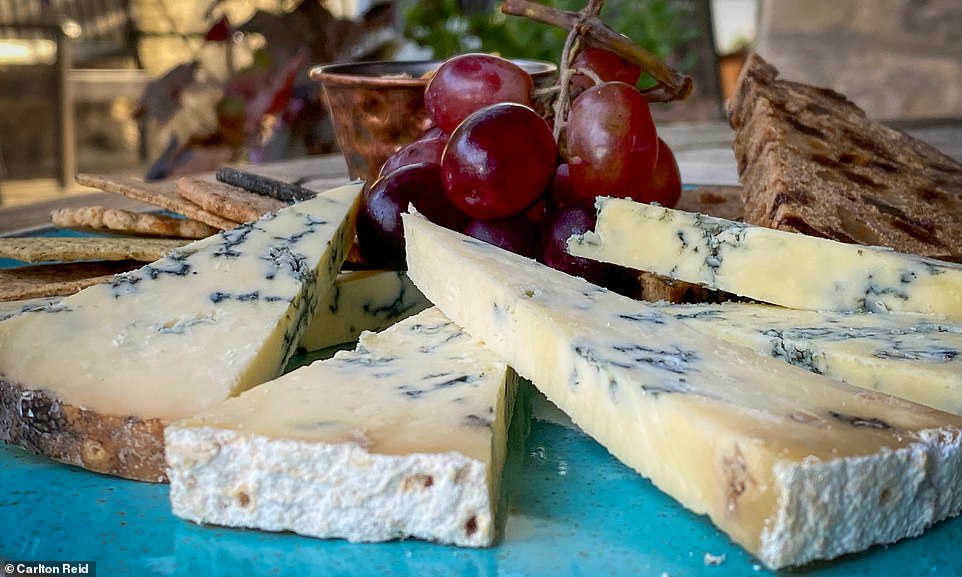 While in Stilton, Reid indulged in a platter of the town’s famed cheese 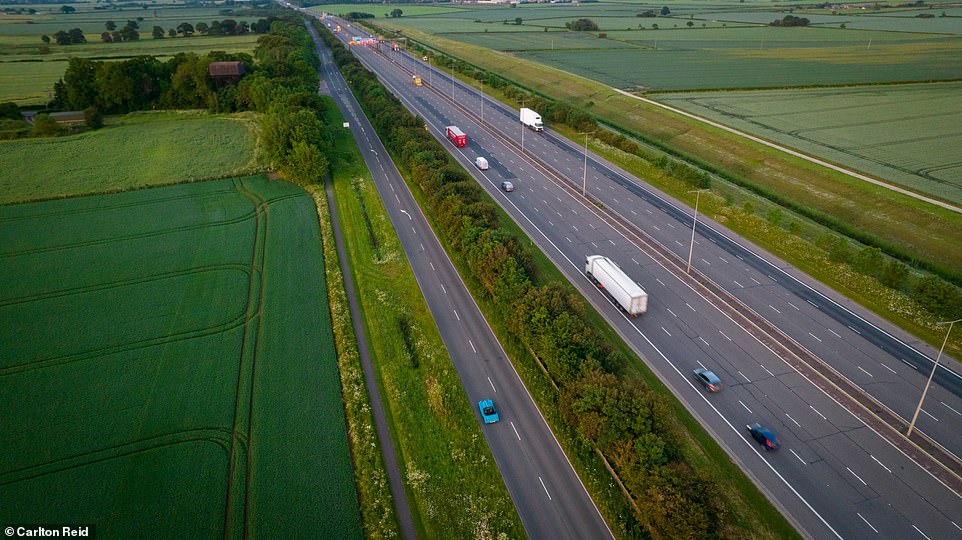 The Morgan on the Great North Road beside the A1(M), near Stilton

A Morgan, you quickly start to realise, is no ordinary car. With its swooping wings and long louvred bonnet, it’s a throwback to simpler times. Simpler, but not slower: the four-cylinder engine is capable of getting the Plus Four to 60mph in less than five seconds; useful, no doubt, for the race track but, perhaps strangely, this is a fast car that you don’t feel the need to drive at speed.

Morgan has been making cars at the foot of the Malvern Hills since 1909 and the Plus Four is the new version of a classic car that Morgan first made 72 years ago. I thought it was the perfect car for driving along romantic stretches of the Great North Road that used to be the A1 – the road, which was born in July 1921, as it was in the 1930s, 1940s, and 1950s, before it was dualled or it morphed into a motorway.

There are lengthy, bypassed stretches of this old A1 made nondescript thanks to numerical downgrades. The B197 skirting Stevenage or the B1043 parallel to Stilton are parts of the old Great North Road, but you’d not know it from those boring B numbers.

I flew my drone over these stretches, capturing the old next to the new, the forgotten next to the traffic-choked. I also launched my eye-in-the-sky to film bypassed parts of the Great North Road that now lie marooned, forgotten.

These asphalt orphans dotted my journey, but I had to seek them out because nature is steadily reclaiming them. There are cats’ eyes skeletons in a rural pub car park near the motorway services at South Mimms, evidence that this quiet cul-de-sac was once the busy A1. A rickety wooden fence blocks the way, the surface of the old A1 now disappearing under moss.

Two hundred miles north, close to Leeming, there’s an 18th-century bridge spanning a beck that lies sandwiched between the old A1 and the new A1(M). I filmed myself from above cycling on this truncated road wedge, imagining the fast-and-furious-for-the-day mail coaches that once trundled over it at the heady speed of 12mph. 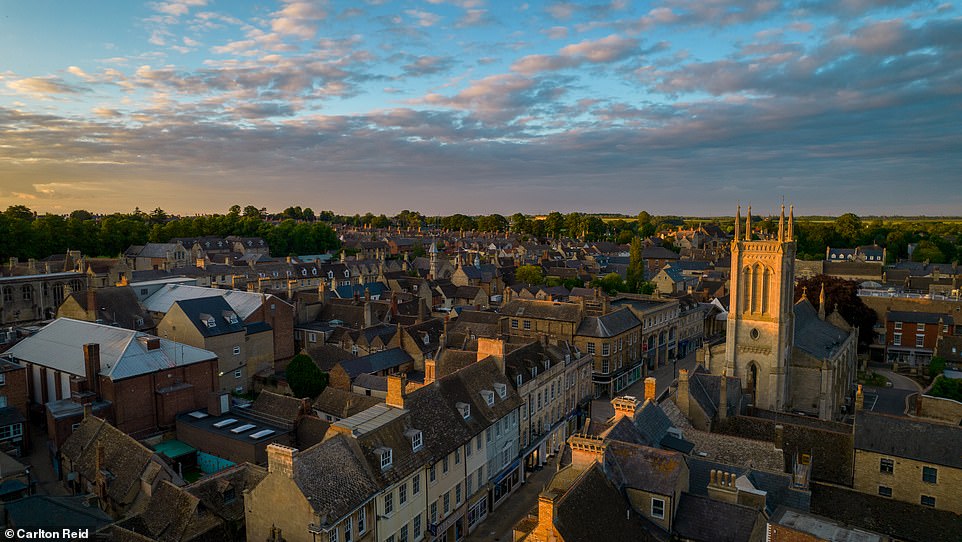 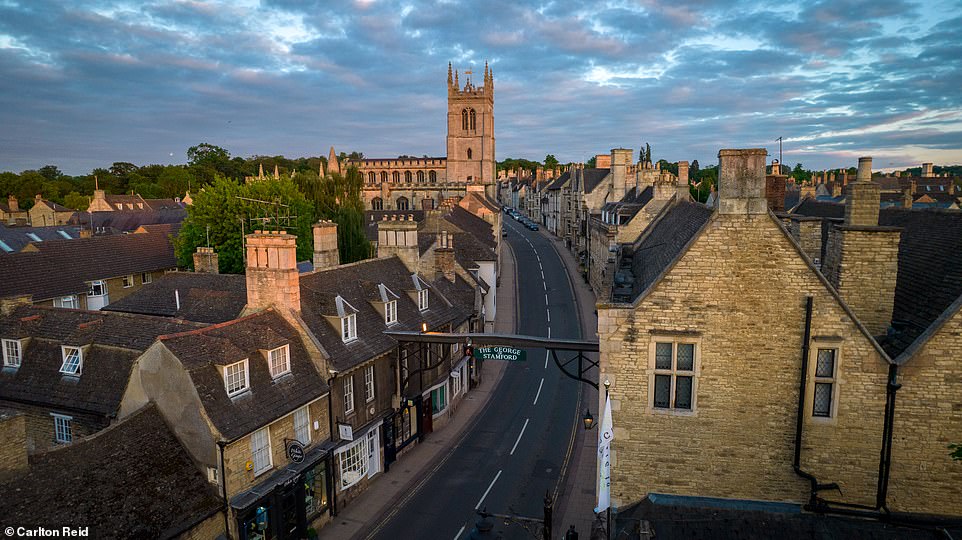 The George of Stamford, including the ‘gallows’ over the Great North Road that has been advertising the coaching inn for hundreds of years. The view from St. Martin’s church was the “finest twixt Edinburgh and London,” wrote Sir Walter Scott in the early 1800s 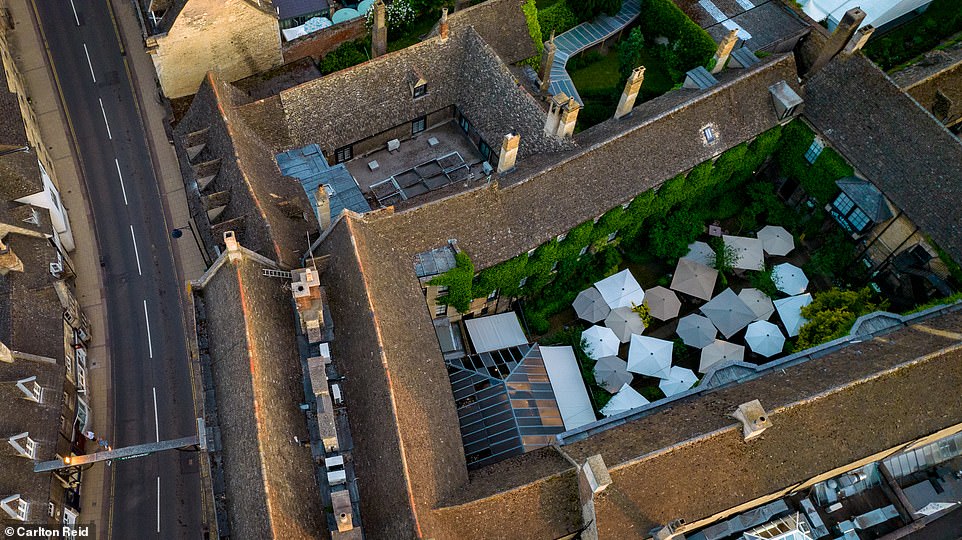 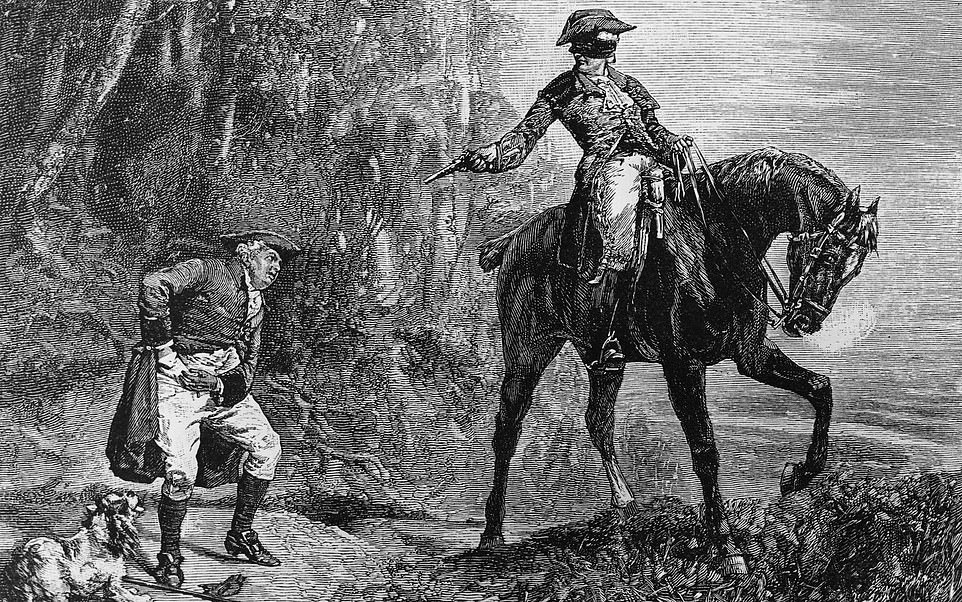 A period illustration of Great North Road highwayman John Nevison, who was probably the robber known as Swift Nicks, so named after a 200-mile dash in 1676 from Kent to York to establish an alibi for a robbery committed earlier that day. This ride was later, wrongly, ascribed to Dick Turpin in the early 19th-century novel Rookwood by Harrison Ainsworth 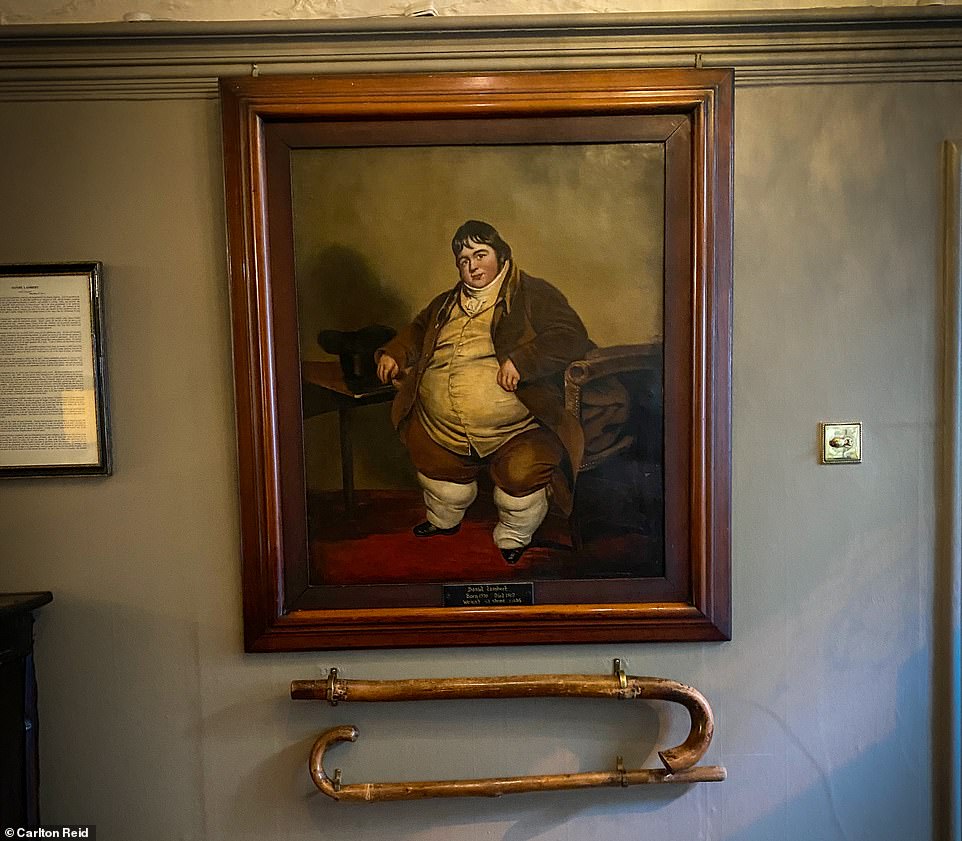 A portrait of Daniel Lambert in the entrance hall of The George of Stamford. Lambert (1770-1809) weighed 52 stone when he died at the age of 39. During his lifetime he was celebrated for his weight. He died at the George – beneath his portrait are his walking sticks

This forgotten, fenced-off crossing was once important. Important because the Grade 1 listed Healam Bridge, built in 1796, sits at the centre of what was once a one-kilometre-long Roman settlement along the then equivalent of the Great North Road. This civilian settlement provided mules for the Cursus Publicus, or Imperial mail service — the ancient version of a petrol filling station, then.

The £318million Dishforth to Leeming section of the A1(M) opened in March 2012 and was realigned not to obliterate either Healam Bridge or the extensive Roman settlement that lies beneath and on either side of the beck crossing.

Similar protection was afforded to a Roman site excavated near Welwyn Garden City. However, rather than being diverted, the A1(M) motorway was built over the top of Welwyn Roman baths, with the archaeology protected with a steel shell.

The baths — now a subterranean museum — are nine metres (29ft) beneath the thundering motorway. I was tickled by the fact that the museum’s outside loos aren’t as civilised as the far older Roman ones: they are compostable rather than flushed with running water.

Talking of civilised I very much enjoyed staying in coaching inns. They’ve been welcoming weary travellers for hundreds of years, long ago nailing the art of hospitality

Talking of civilised, I very much enjoyed staying in coaching inns. They’ve been welcoming weary travellers for hundreds of years, long ago nailing the art of hospitality.

Odd word that, hospitality; it’s clearly related to the word ‘hospital’. According to the dictionary definition, the English word ‘hospital’ — a place for treating sick or injured people — originally comes from the Latin noun ‘hospes’, which stands for a ‘guest or visitor’ and ‘one who provides lodging or entertainment for a guest or visitor’.

The George at Stamford – one of the three charming coaching inns I lodged at on this road trip – started life as a hospital-cum-inn run by the medieval Knights Hospitaller.

Queen Elizabeth I might have stayed a night or two (visiting her key advisor, William Cecil, builder of glorious Burghley House, less than a mile from Stamford,) and Charles I definitely lodged here. Later, it was a favourite haunt of novelist Sir Walter Scott who, in the early 1800s, wrote that a view past the George was the ‘finest betwixt Edinburgh and London’.

Today, the George offers a mix of the modern and the old: bedrooms include wall sockets with USB charging points, yet there are Elizabethan mullion windows, too.

The kind of second-floor windows that almost every inn along the Great North Road claims were once thrown open by highwayman Dick Turpin to make his escape on his faithful steed, Black Bess.

Poppycock: Turpin, a murderous thief, not a dashing hero, couldn’t possibly have stayed — and escaped from — the number of inns that claim him, and a later author made up the name for his supposed horse. 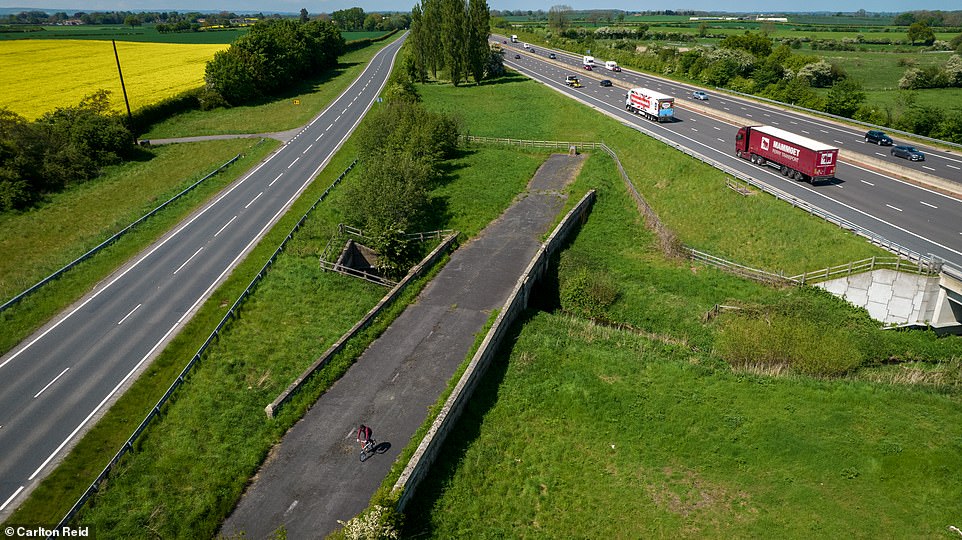 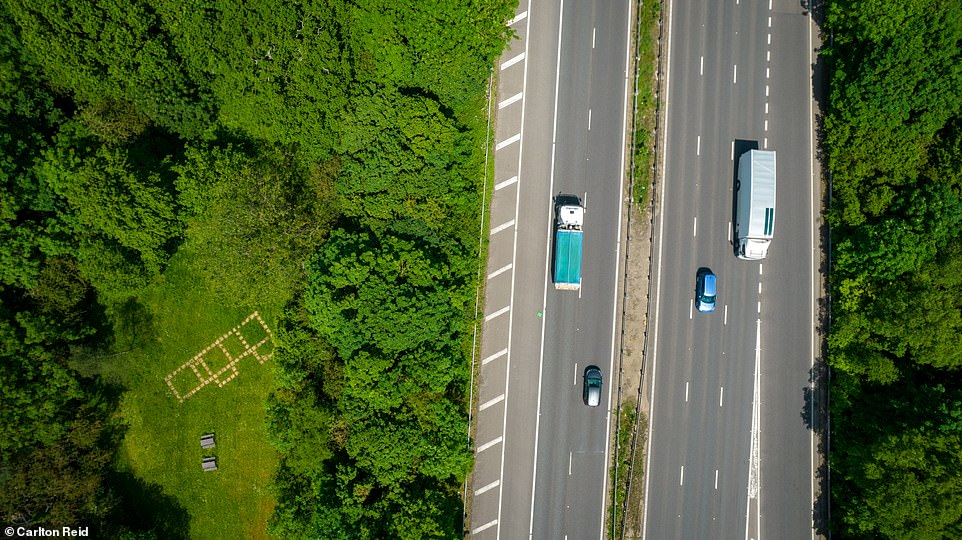 Rather than being diverted, the A1(M) motorway was built over the top of Welwyn Roman baths, with the archaeology protected with a steel shell 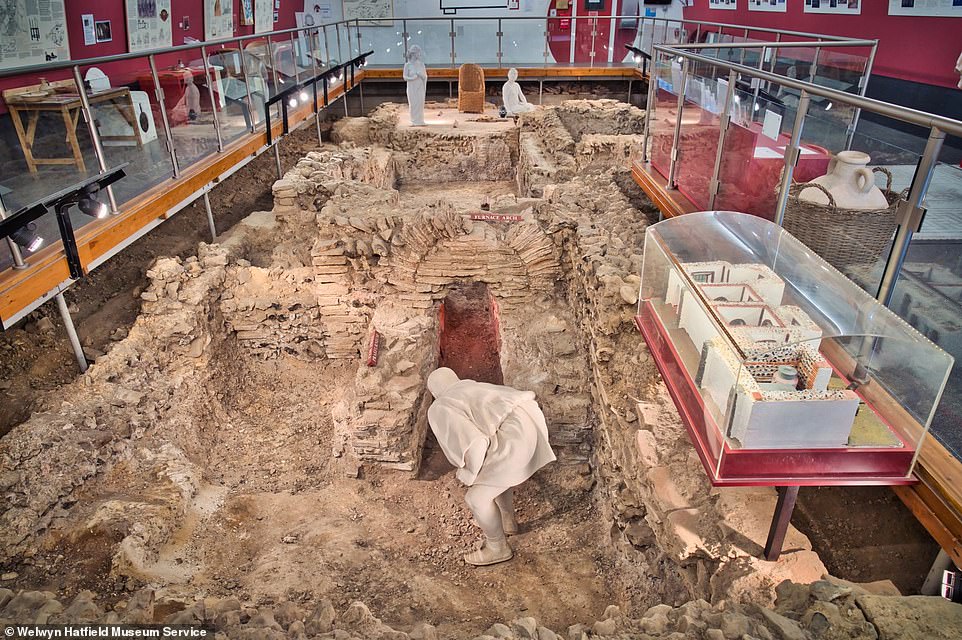 The Roman baths – now a subterranean museum – are nine metres beneath the thundering motorway. Reid said of the museum: ‘I was tickled by the fact that the museum’s outside loos aren’t as civilised as the far older Roman ones: they are compostable rather than flushed with running water’

The Bell in Stilton has a Dick Turpin story to tell — he’s said to haunt the hotel, which would make him a busy ghost — but the verifiable history is far more interesting. The Bell, which dates to at least 1500 and was rebuilt in 1642 at the start of the English Civil War, was an important posting inn on the Great North Road.

It was also the first to sell — and popularise — what would become known as Stilton cheese. Writing in 1722, Robinson Crusoe author and inveterate traveller Daniel Defoe described how cheese was ‘brought to the table [in Stilton] with mites or maggots round it, so thick that they bring a spoon with them for you to eat the mites as you do the cheese’.

I can report that the Stilton platter I ordered while staying at today’s Bell didn’t arrive with any wiggly protein bites. 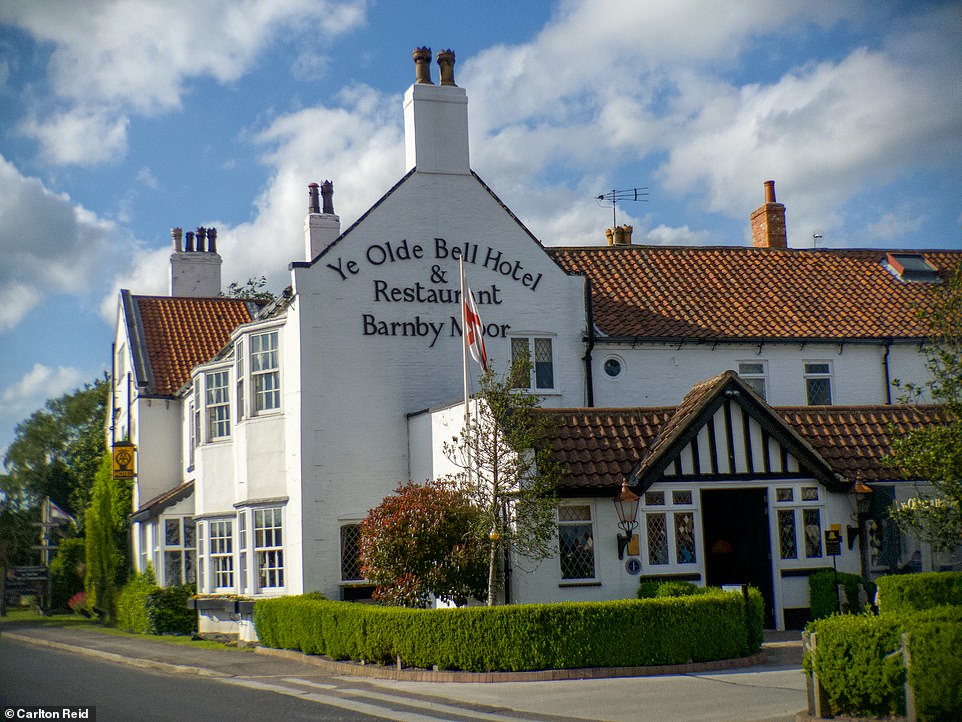 Ye Olde Bell hotel in Barnby Moor, near Doncaster, was Reid’s third port of call. The coaching inn’s guestbook includes Princess Victoria, who stayed there two years before she was crowned Queen in 1837, and American crooner Bing Crosby

My third coaching inn of the trip has also welcomed famous guests down the years. Princess Victoria, two years before she was crowned Queen in 1837, stayed at Ye Olde Bell of Barnby Moor (you can now stay in the Victoria suite), and 131 years later, the horsey hotel was home away from home for the American crooner Bing Crosby visiting the nearby Doncaster racecourse.

Arriving in a Morgan at each of those glorious coaching inns was almost as appropriate as arriving in an 18th Century mail coach and, just like the travellers of the turnpike era, I had to shake road muck from my clothes before I entered. Driving an open-top car was lovely, but it was also undeniably dusty.

The following day I returned the car to Great Malvern via a bunch of fast roads. They may have been made for speed, but there’s no romance in a modern motorway; not even in a Morgan.

Weekly rental of a Morgan Plus Four – direct from the Morgan factory at Great Malvern – costs £1,295 (www.morgan-motor.com).

Double bedrooms in the Bell at Stilton start at £69.50 (www.thebellstilton.co.uk). You can expect to pay £270 for a double at the George of Stamford.

The Victoria Suite at Ye Olde Bell of Barnby Moor costs £380 per night. For the complete royal experience, book into the hotel’s modern, award-winning spa, where an evening wind-down costs £75 (www.yeoldebell-hotel.co.uk).

Carlton made a fascinating video of his journey. Click here to view it.