Sometimes you wait eagerly to watch your favourite football team play – and they concede within five minutes. From an own goal.

But then the disappointment is banished when they rally and win 4-1 with a swaggering performance, including a goal courtesy of a 35-yard screamer after a 20-pass build-up.

It’s an apt (ish) analogy of my experience at new hotel Concepcio by Nobis in Palma, which is in the elite Design Hotels portfolio, an organisation that curates some of the world’s best-looking properties. 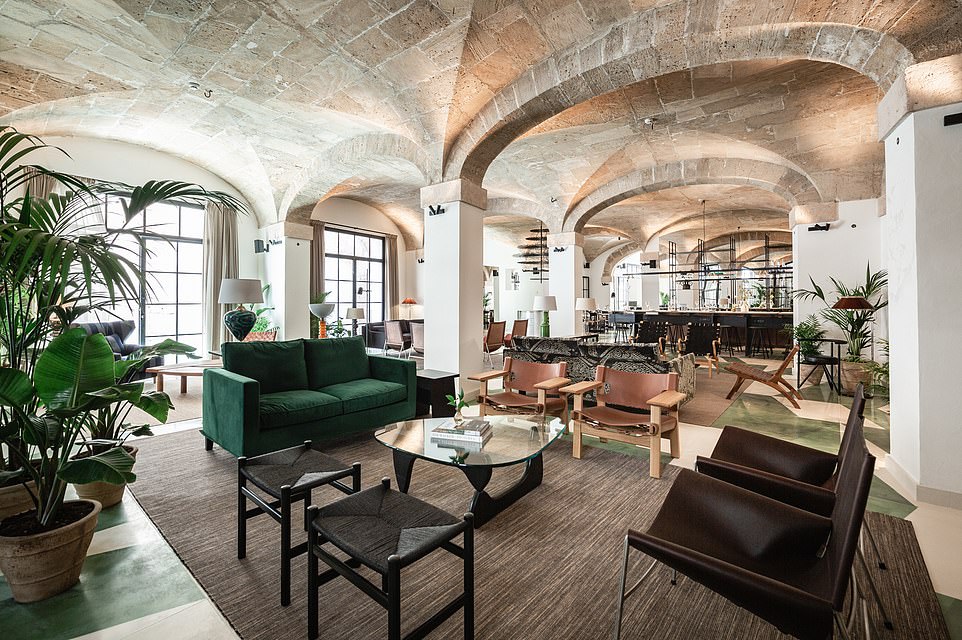 Concepcio is a worthy inclusion, but first impressions were tainted.

Shortly after arriving we ordered some hummus by the courtyard plunge pool 10 minutes before poolside service finished, at 7pm.

But the dish lacked the requisite quantity of crudités, so I popped down to the restaurant a few minutes past 7pm and asked if we could have some bread to mop up the (delicious) hummus.

‘I’m afraid service by the pool has ended,’ I was told.

‘But I just want some bread,’ I replied with eyebrows raised as far as I could get them. ‘To go with the hummus we’re still eating.’

‘Service has ended,’ I was told again.

We were alone by the pool. The restaurant wasn’t busy. But no bread. 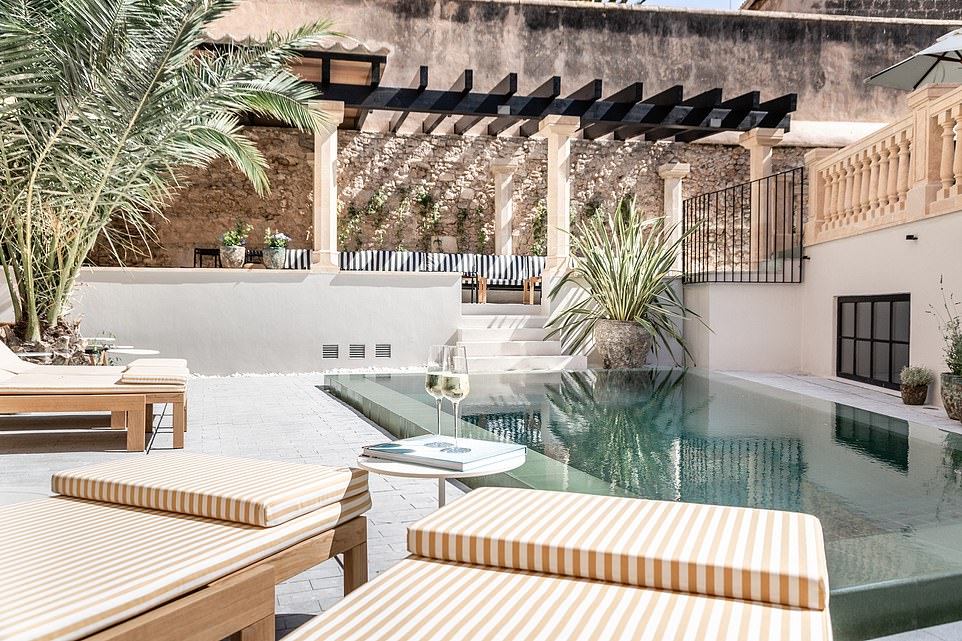 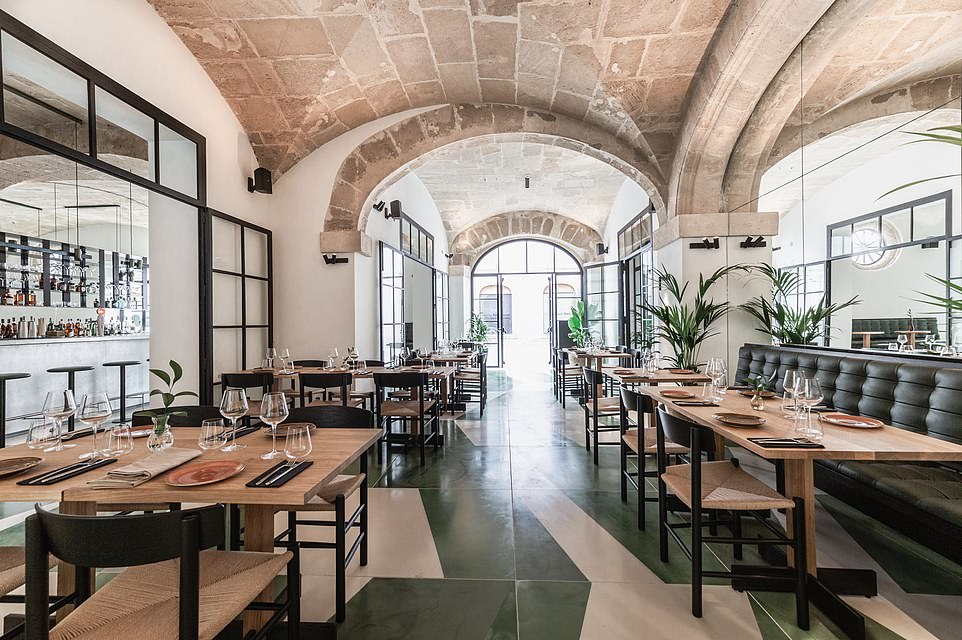 Pictured here is the dining room. It’s where breakfast is served and in the evening it becomes the slick Xalest restaurant 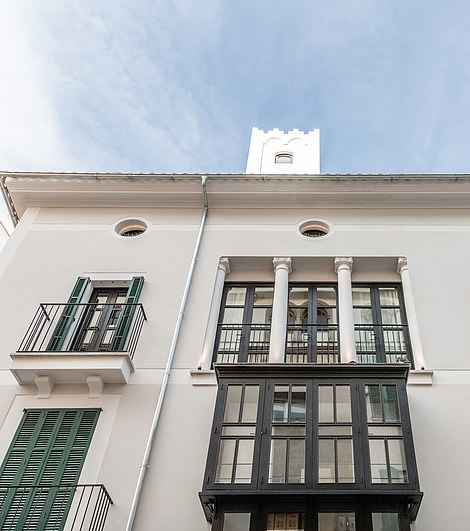 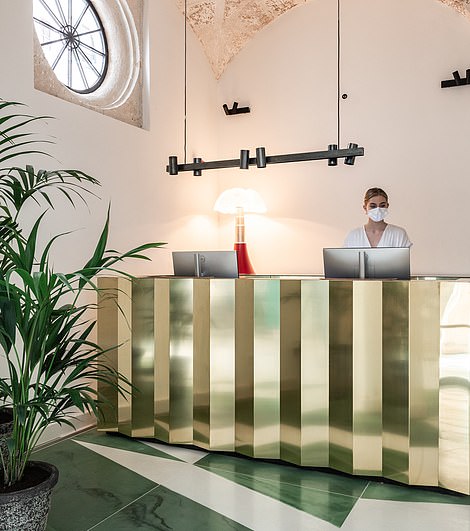 Concepcio by Nobis is named after its location, Carrer de la Concepcio. This is a central thoroughfare that leads you right into the thick of the beautiful maze-like medieval Old Town

I was disgruntled at this jobsworth-esque customer service, especially considering the hotel’s position as a luxurious sanctuary.

When we returned to our room the next night, the cleaning staff hadn’t tidied the towels in the bathroom and I began mulling a headline – ‘The bathroom towel and bread-serving shambles that shames the Balearics’.

I know, an overreaction (and the lawyers wouldn’t like that). But I had high expectations and even my partner, who has a very forgiving nature, agreed that the hotel should reassess its towel and bread protocols.

However, when we checked out six nights later, we were fist-bumping the waiting staff and vowing, sincerely, to return.

What happened? Concepcio turned on the magic – and wooed us.

The interior design and architecture was the first stage in the seduction.

The 31-bedroom hotel occupies a site that dates to the mid-16th century and a property that has been a soap factory and a private residence. 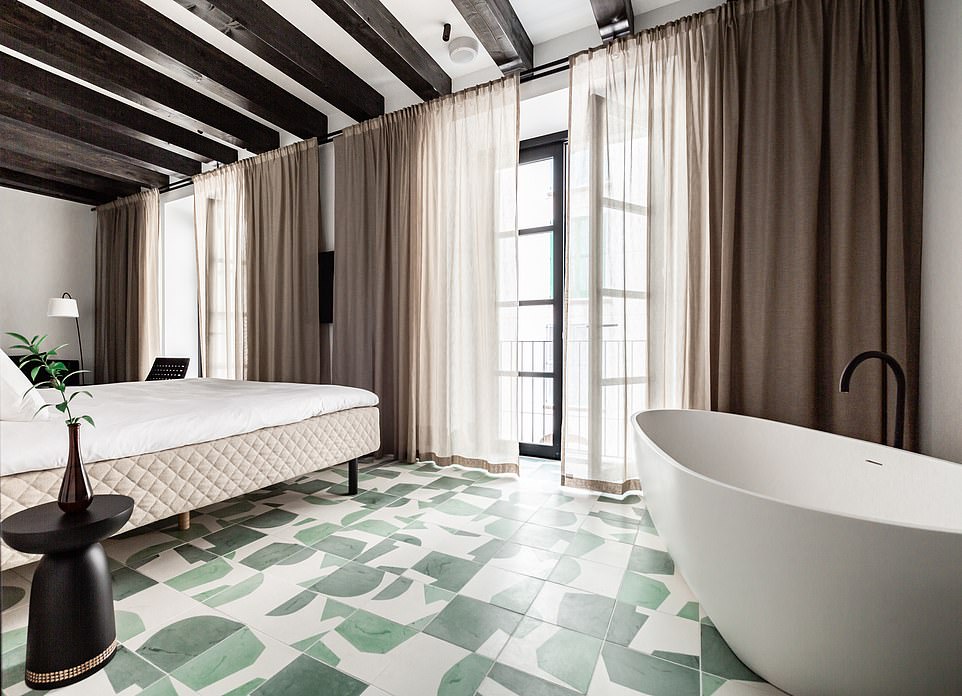 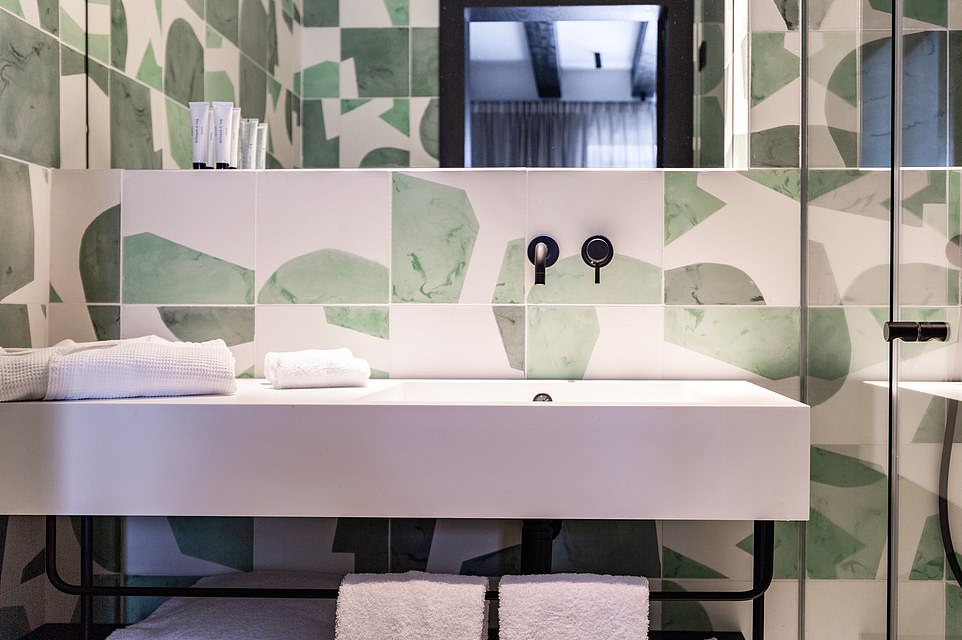 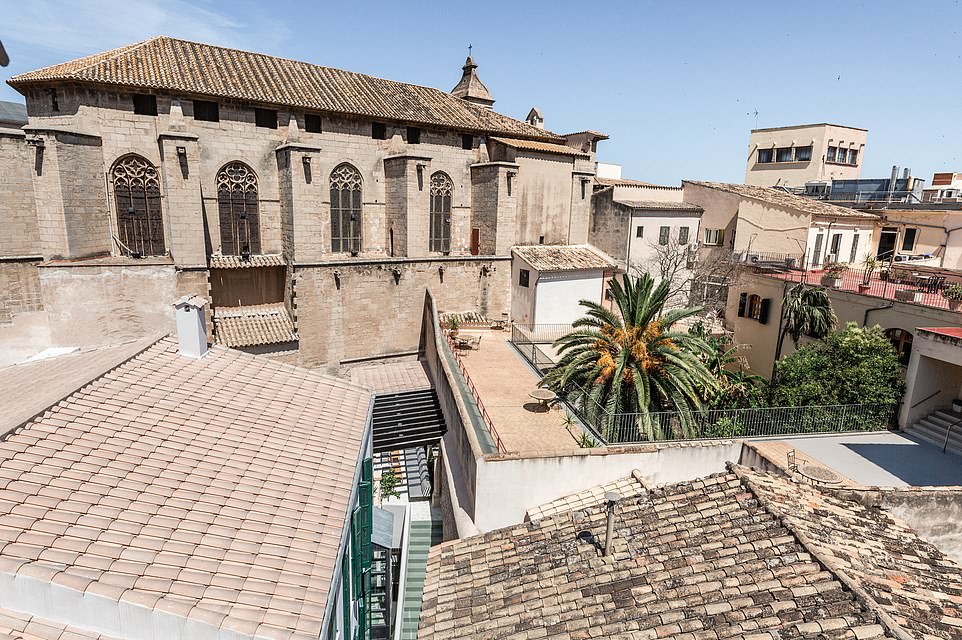 This image shows how Concepcio fits snugly into the tangled web of Palma’s Old Town buildings. The green stairs you can see in this image lead from the pool to the restaurant 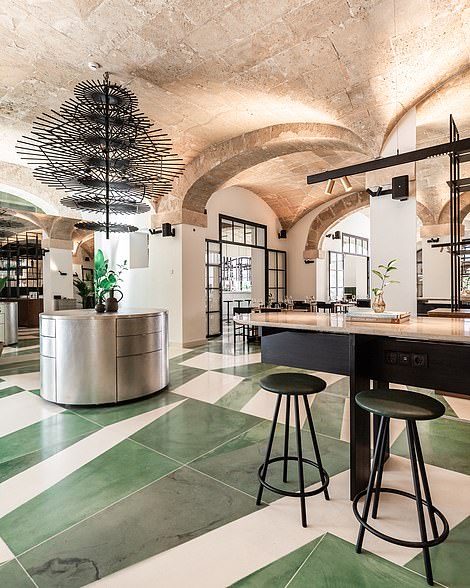 It became increasingly difficult to hold towel-and-bread-based grudges in a hotel that looked this damn good.

The eye-catching inventory of designer furniture, lighting and fittings – I particularly liked the Christmas tree light shade in the restaurant – the grand staircase, the beautiful green-and-white handmade watercolour-style tiles running through the bedrooms and public spaces, the alluring black beams and doors. It was all just so utterly photogenic. Hell, even the black light switches were worthy of a cover shoot.

And that courtyard plunge pool – stunning. An Instagrammer’s paradise.

Then there was the location.

Concepcio by Nobis is named after its location, Carrer de la Concepcio, a central thoroughfare that leads you right into the thick of the beautiful maze-like medieval Old Town – and its bounty of epic wine bars, cafes and restaurants. 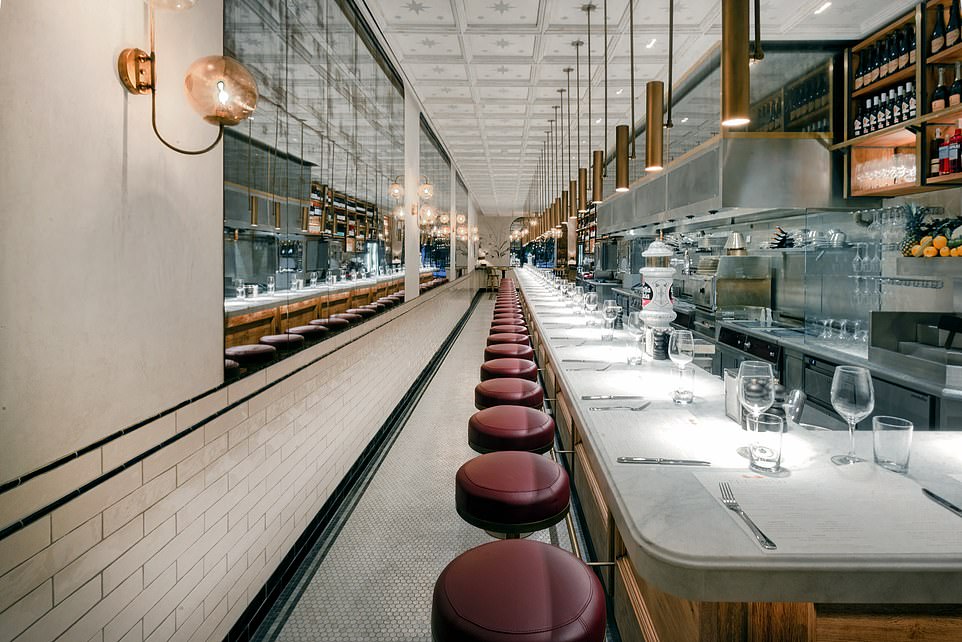 El Camino, pictured, is a superb tapas restaurant a few minutes’ stroll away from Concepcio that’s run by Englishman Eddie Hart, who co-founded the renowned Barrafina restaurants in London

Of the latter, we discover a few superstars: Patron Lunares (slightly out of the Old Town on C. de la Fabrica), Aromata (a two-minute walk from Concepcio), Botanic at Can Bordoy Grand House & Garden (a ten-minute walk from Concepcio, enchanting setting) and El Camino, a top-notch tapas restaurant a few minutes’ stroll away that’s run by Englishman Eddie Hart, who co-founded the renowned Barrafina restaurants in London.

We perched at the long marble counter for a lunch and in between mouthfuls of exquisite food – including sublime scallops with a moreish zingy sauce and impeccable jamón croquettes – and swigs of excellent wine (even the four-euro glass was heaven) we watched with smug amusement as our multi-tasking waiter turned away one person after another at the door hoping to get a walk-in seat.

Booking is a very sensible manoeuvre. 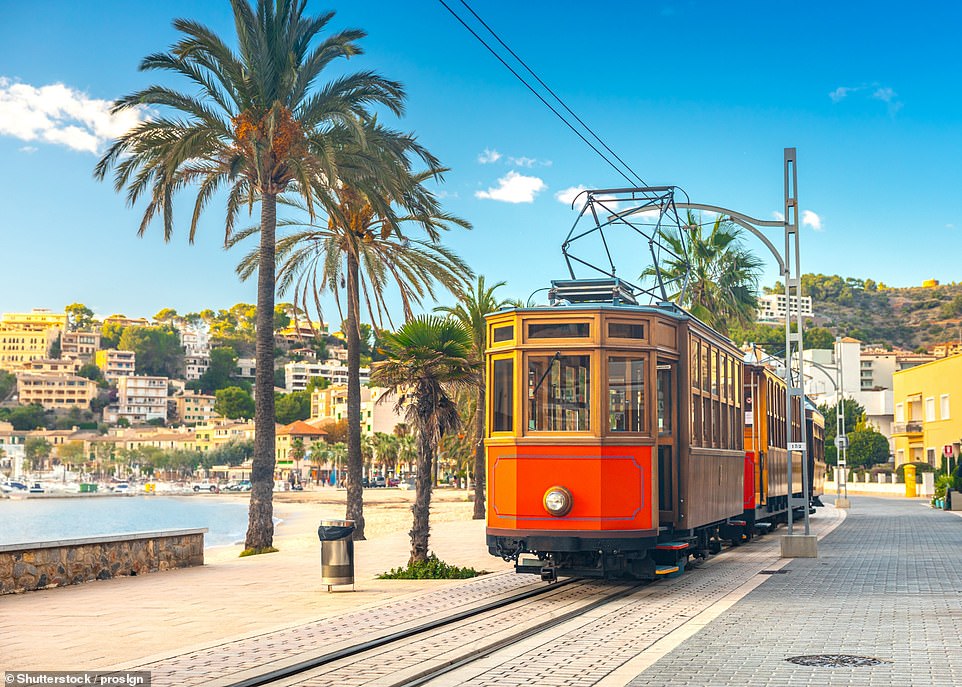 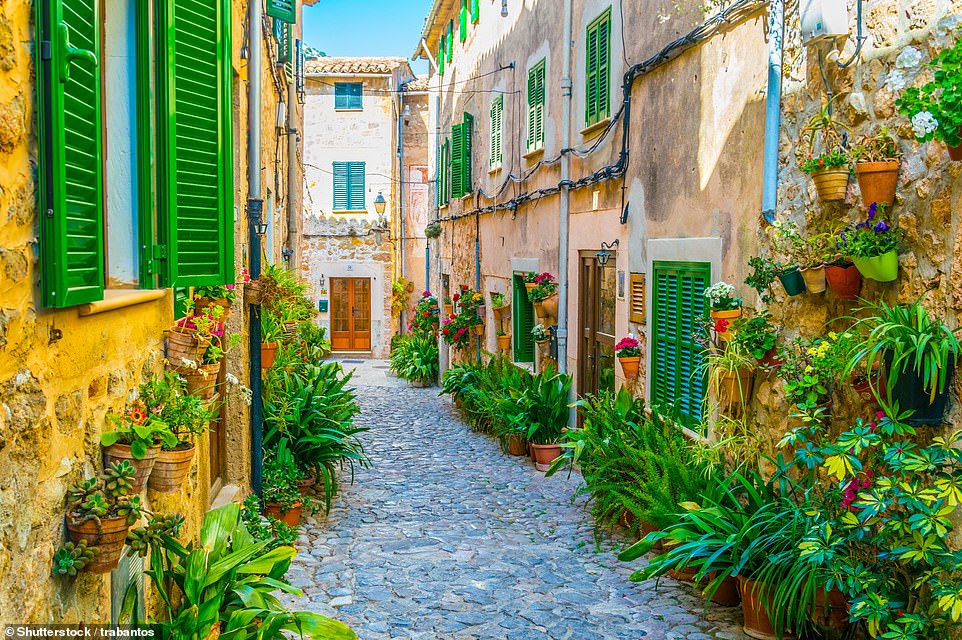 Ambling around the super-cute village of Valldemossa on Mallorca, pictured, is an absolute must 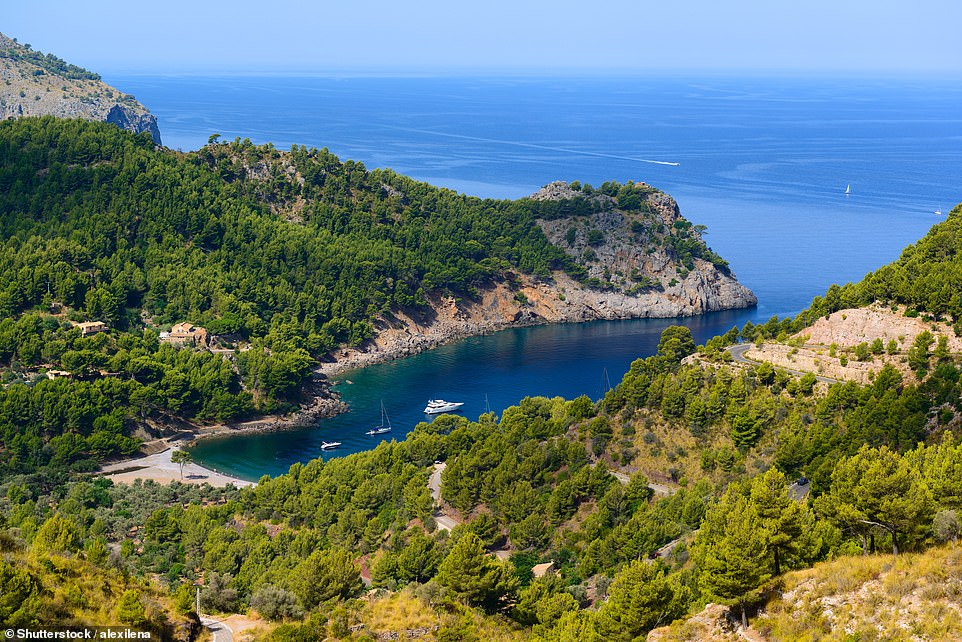 The more-or-less secret Cala Tuent on the north side of Mallorca. Reaching this breathtaking cove involves driving one of the most spectacular roads in Europe 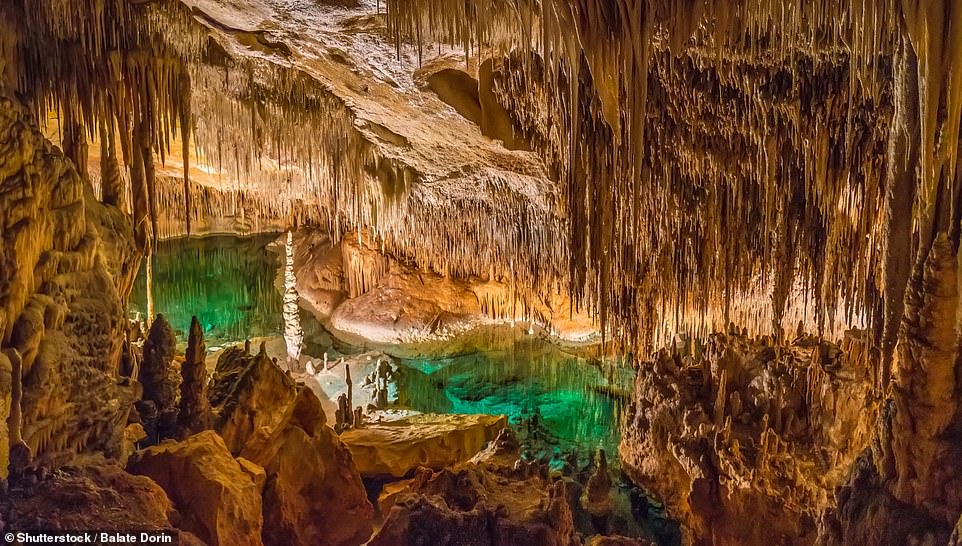 The other-worldly Drach Caves. The admission price includes a classical concert, with the musicians sitting in a boat

Concepcio also excels in the catering department – it delivered the most majestic room-service burger I’ll probably ever have, I had the most gloriously fruity cava in living memory at its slick Xalest restaurant (the tapas was on point, too) and breakfast (in the same room) was always sheer joy, not just because the chefs rustled up the creamiest of omelettes every morning, but because the cheery waiters were always on their game.

The welcoming, always-helpful reception staff get a hat-tip, too.

By the time we’d worked through our week-long itinerary of fattening up at local restaurants, ambling around the super-cute village of Valldemossa, driving around spectacular hairpins to reach the hidden-gem beach Cala Tuent, riding the fun pre-war (s) tram from Soller to Port de Soller and exploring the other-worldly Drach Caves on the far eastern side of the island, Concepcio was 4-1 up.

See you next year! 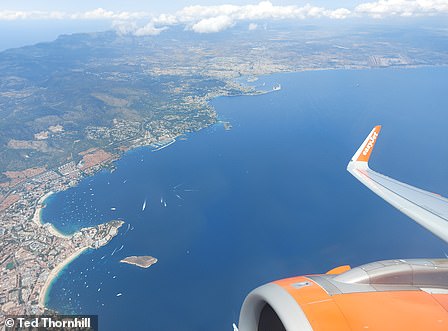 Ted and his family were hosted by Concepcio by Nobis for one night and paid for a further five nights.

Booking.com offers car rental from over 160 countries in the world.

For more on The Regenerative Clinic, which offers Covid travel testing from £49, click here.

For more on Qured, which offers testing from £39, click here.

EasyJet flies to Mallorca from London Gatwick seven days a week throughout the year with fares available from £26.99 per person (one-way, including taxes and based on two people on the same booking).

EasyJet flies to Mallorca from London Luton seven days a week throughout the summer with fares available from £24.99 per person (one-way, including taxes and based on two people on the same booking). Visit easyJet.com.