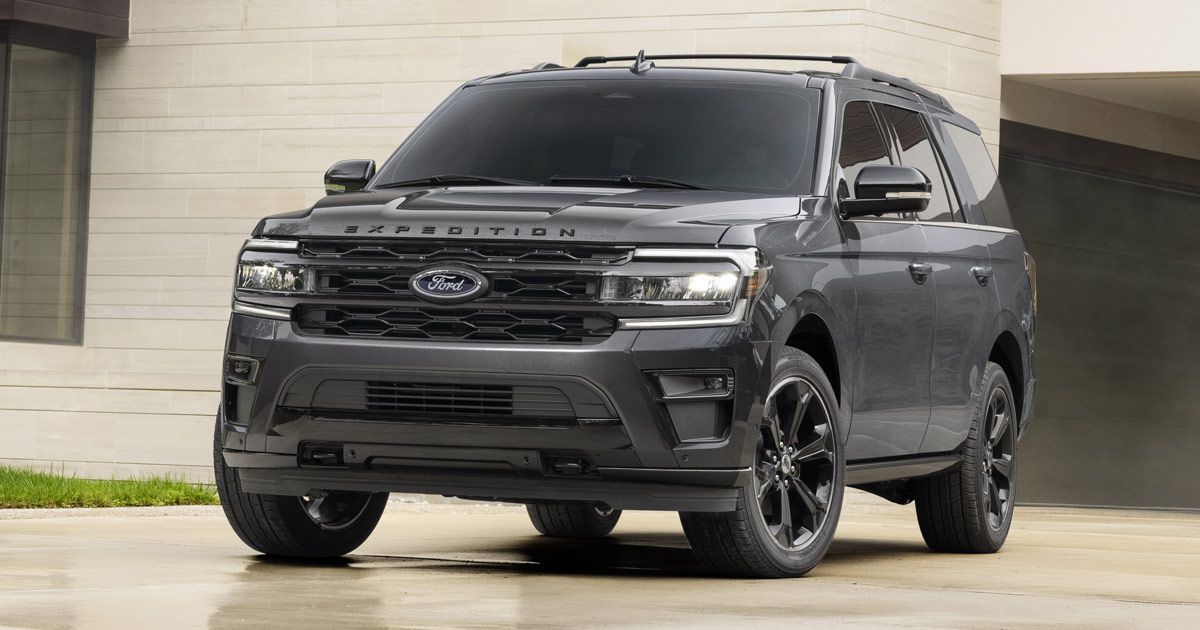 For 2022, the Ford Expedition full-size SUV is on the receiving end of a welcome refresh. Two new trim levels are coming, the automaker’s Blue Cruise hands-free driving aid will be offered, and you can get a massive infotainment screen inside (seriously, it’s huge). These changes, and many more, should help this rugged family-hauler better compete with the popular Chevy Tahoe and brand-new Jeep Wagoneer, serious threats from Ford’s crosstown rivals.

Making their debut Tuesday, two new trims are available for the 2022 Expedition, and they’re at opposite ends of the spectrum. The Expedition Timberline offers more rugged styling and substantially enhanced off-road capability, while the Stealth Performance Package has a blacked-out look and should feel sportier on the street, which, to be honest, is where large SUVs like this spend probably 98% of their time.

The Timberline model is the most off-road capable Expedition Ford’s ever offered from the factory. Naturally, a few visual cues speak to this enhanced performance, though they do not shout. All the optical upgrades here are all tastefully done. Up front, there’s a unique grille along with some spiffy orange accents, just like on the smaller Explorer Timberline. This Expedition gains a wider track and rolls on black 18-inch wheels wrapped in rugged all-terrain tires. Inside, you can get a Deep Cyprus Green cabin, which is offset by trim and stitching rendered in orange. But with the Timberline, the biggest upgrades here aren’t so obvious.

Thanks to an elevated ride height, this Expedition has 10.6 inches of ground clearance, more than a Jeep Wagoneer. This Expedition’s approach and departure angles are improved, there’s a juicy two-speed transfer case, and you can get the F-150 Raptor’s front skid plate, which not only looks cool, but should do a great job shielding delicate powertrain components from damage out on the trail. Other mechanical upgrades include a standard limited-slip rear differential, larger stabilizer bars and unique springs, plus a range of drive modes.

Just like the new Bronco, the Timberline model features Ford’s clever Trail Turn Assist. Basically, in certain situations this system can lock the inside rear wheel to significantly decrease the turning circle, which can be a godsend out on the trail. Not that you will, but thanks to these upgrades, the Expedition Timberline should be able to take you pretty far off the beaten path.

Of course, if you’re only making runs to Costco every other weekend rather than bombing down old logging trails, consider the other new-for-2022 Expedition trim. The street-focused Stealth Performance Package will be available on midrange Limited and extended-length Limited Max models. It offers more athletic looks and a sportier suspension. This Expedition builds on the Stealth Appearance Package that’s been around for a few years, though it’s curious that Ford didn’t just brand this an ST model like its other performance-enhanced models.

For a sinister look, this street-focused SUV’s grille, mirror caps, roof rails, running boards, liftgate applique and lamp housings are all blacked out, as are its swanky 22-inch wheels. Even the Ford emblems have received the same treatment. Providing a dash of color, the brake calipers are red.

Fancy Platinum models come standard with a continuously controlled damping suspension with road preview, a setup that should also be optional on the Limited trim and above. Expeditions fitted with the Stealth Performance Package have the adaptive dampers as well with firmer tuning, though how sporty a multi-ton SUV can feel remains to be seen.

Acceleration shouldn’t be an issue, at least. As with the current model, just one powertrain is offered in the 2022 Ford Expedition, though it’s available in two flavors. You get a 3.5-liter EcoBoost twin-turbo V6 that’s, predictably, matched to a 10-speed automatic transmission. In standard tune, this engine belts out 375 horsepower and 470 pound-feet of torque, impressive numbers to be sure. But the Timberline trim and examples fitted with the Stealth Performance Package get a high-output variant that’s good for 440 hp and 510 lb.-ft. of twist. That’s more of each than you get in either a Jeep Wagoneer or Chevy Tahoe.

When fitted with the heavy-duty towing package, you can drag up to 9,300 pounds behind the 2022 Expedition. That’s a good bit more than the Chevy, but less than the Jeep can manage.

Saving a few drops of fuel, this SUV can also be had with an active air dam. It deploys at speeds greater than 40 mph and supposedly improves aerodynamics by 4% at highway speeds. On its own, this add-on probably doesn’t make too much of a difference, but every little bit helps.

There’s plenty of important stuff to highlight inside the refreshed Expedition, even if its cockpit isn’t entirely new. Some small components carry over, but importantly, the dashboard was redesigned. It looks more flowing than before and features higher-quality materials and finer details. With extra pressure from the Wagoneer and Tahoe, Ford had to move the needle and it did.

A jumbo 12-inch landscape-oriented screen is standard equipment, running the automaker’s Sync 4 infotainment system. But as in the Mustang Mach-E all-electric SUV and upcoming F-150 Lightning pickup truck, you can also get a mammoth 15.5-inch portrait-oriented display running Ford’s Sync 4A multimedia array. Either way, both infotainment offerings support wireless smartphone mirroring via Apple CarPlay and Android Auto. Beyond all that, a 12.4-inch digital instrument cluster with Expedition-specific graphics is offered as well.

Making long highway trips less draining, Ford’s Blue Cruise hands-free driving aid will be standard equipment in the top-shelf Platinum model, courtesy of a new electrical system. That is the only trim level this advanced feature will be offered on, at least for now. It sounds like Ford may make Blue Cruise available on other models in the coming years, which would be super smart. Similar to GM’s pioneering Super Cruise system, this setup allows hands-free driving on more than 130,000 miles of approved highways in North America.

Every Expedition comes standard with automatic emergency braking and pedestrian detection. An improved 360-degree camera system is offered and Pro Trailer Backup Assist 2.0 provides a more seamless towing experience than before. Other fancy features include an available 22-speaker Bang & Olufsen sound system. This feature should be available on King Ranch, Platinum, Stealth Performance Package and Timberline models. Amazon Fire is now integrated into the rear-seat entertainment system, which includes HD touchscreens with 16 gigabytes of storage.

Unfortunately, pricing and fuel economy information is not available right now, but the redesigned 2022 Ford Expedition is expected to start arriving at dealerships in the first quarter of 2022. Once again, this SUV will be built in Louisville, Kentucky.

The updated Expedition looks better than ever, is more capable and the tech it offers is a huge leap forward. With strong competition from the Tahoe and Wagoneer, Ford had to step up, and it looks like it has.

2022 Ford Expedition: Some big changes for a big SUV

Climb in the driver’s seat for the latest car news and reviews, delivered to your inbox twice weekly.